Sci-fi travel for passengers and freight at 745mph is gaining traction thanks to Musk concept and Branson investment.

Radical plans to transform intercity travel for passengers and freight are taking shape as the world’s first ultra-fast hyperloop systems take a step closer to reality.

A hyperloop is a hybrid of air and train transport. Pods or carriages ‘float’ in tubes, raised by magnetic levitation to overcome friction, and flying through virtual vacuums to avoid air resistance.

Ten routes around the world are conducting feasibility studies for a hyperloop, including London to Edinburgh and Glasgow to Liverpool in the UK, as well as cities in the US, India, Mexico and Canada. 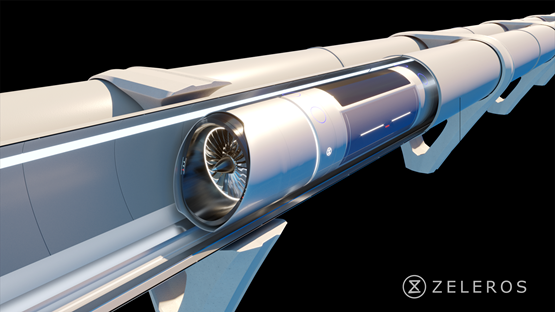 Last October, the Virgin Group invested in Hyperloop One and, according to Sir Richard Branson, “this groundbreaking technology will change transportation as we know it and dramatically cut journey times”.

The current working record for a hyperloop is nearly 240mph which was set in Nevada, USA, by Virgin Hyperloop One.

The Spanish start-up, Zeleros, claims its system will be capable of 1,200kmh (745mph), cutting the journey time from Paris to Madrid to around an hour. It also sees huge opportunities for the hyperloop to deliver freight, and envisages lines connecting the commercial ports of north and southern Europe.

The electric-powered system is greener than traditional fossil fuel-powered transport systems and has the possibility to function on demand, rather than to a timetable like traditional rail and air travel.

The concept of hyperloop travel is the idea of Elon Musk, of Tesla fame, who first advanced his ideas for it in 2012.