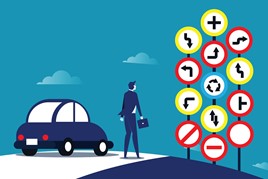 A new report entitled UK Connected and Automated Mobility Roadmap to 2030, proposes that improved vehicle connectivity will result in road signs and signals being decommissioned as early as 2027.

The report by Zenzic, an organisation “dedicated to accelerating the self-driving revolution in the UK by uniting industry, government and academia”, states that emerging CAM (connected and automated mobility) technologies will eliminate the need for road signage, with UK drivers seeing “naked highways” by 2027.

It states that from as early as next year, new planning guidance and blueprints for CAM-ready cities, towns, highways and rural roads will look to accommodate CAM services for efficient operations. This it says “will see new highway schemes move away from high cost (£10 million per km of smart motorway) assets in favour of digital infrastructure”.

It continues: “In addition, improved vehicle connectivity will eliminate the need for new road signage. The physical evolution and decommissioning of signs and signals expected from 2027 will be the first visible indication that new road infrastructure has been deployed, followed by the widespread adoption of in-car signalling (using in-car technology to digitally display speed limits, highway exits, and traffic updates for example) in 2028”.

Daniel Ruiz, CEO at Zenzic said: “We are in a period of dramatic social and economic change. Transport is fundamental to the change and will soon be transformed by the new technologies associated with connectivity and automation, including digital infrastructure that will change the face of the UK’s highways.

“The ‘naked highway’ concept aims to bring economic benefits in terms of local and national efficiencies, as well as tangible benefits to public mobility including improved safety and better routing through centralised communication with drivers.”

Zenzic says that the transition, development and widespread adoption of digital road infrastructure will be informed by new standards, following agreed models for the digitisation of sign assets, as well as the specification of new safety services. In the next 10 years, this will include “identifying common approaches to safety and design standards" and in the next five years "describe the mapping requirements for digital road infrastructure”.

How the widespread removal of road signs and signals within the timeframe proposed by Zenzic would work if the UK’s vehicle parc is still a combination of connected, autonomous vehicles and non-connected and non- autonomous vehicles, is unclear.

However Zenzic recognises that “having the infrastructure in place to facilitate the development and testing of self-driving technologies and services will be key to unlocking insights that inform these standards and regulations, service design, and technology requirements”.

Interested in how the fleet industry will evolve? Head to our Future Fleet section to find out more.

The Smart Transport Conference, Birmingham ICC, 18 September 2019, is the UK's most essential meeting place for public and private sectors.