Fleet and business new car registrations are showing signs of recovery, but private demand is far greater, new figures from the Society of Motor Manufacturers and Traders (SMMT) show.

There were 72,550 new company cars registered to fleet and business users in June, a 10-fold increase on the 7,347 company cars sold in the previous month of May.

Private demand proved more resilient than business, down 19.2% in June with orders made pre-lockdown resulting in 72,827 registrations and accounting for more than half of the market.

The market is almost 616,000 units, or 48.5%, behind the same period last year. But, with one in five showrooms in England remaining shut throughout June, and those in Wales and Scotland unable to open until the end of the month, there remains some uncertainty regarding the true level of demand, says the SMMT.

Mike Hawes, SMMT’s chief executive, explained: “While it’s welcome to see demand rise above the rock-bottom levels we saw during lockdown, this is not a recovery and barely a restart.

“Many of June’s registrations could be attributed to customers finally being able to collect their pre-pandemic orders, and appetite for significant spending remains questionable.”

The hoped for release of pent-up sales has not yet occurred, says the SMMT, with consumer confidence for big ticket purchases looking weak meaning that automotive is likely to lag behind other retail sectors.

As the wider retail and hospitality sectors re-open and society and the economy begin a gradual return to normality, the true picture of consumer confidence is likely to emerge.

However, concerns remain with the Government’s Coronavirus Jobs Retention Scheme winding down and major employers across all sectors announcing significant job losses. The subsequent effect on livelihoods as well as on business and consumer confidence will not help a depressed market, it says.

The scale of the impact on the fleet sector can be seen in the results of a Fleet News survey in the June digital edition of Fleet News.

Fleets said they expected the long-term impact of coronavirus on operations to include reduced mileage, greater use of technology and fewer company cars.

Hawes said: “The Government must boost the economy, help customers feel safer in their jobs and in their spending and give businesses the confidence to invest in their fleets. Otherwise it runs the risk of losing billions more in revenue from this critical sector at a time when the public purse needs it more than ever.”

Jon Lawes, managing director of Hitachi Capital Vehicle Solutions, believes there are "positives" as the industry edges closer to pre-Covid-19 levels of output.

"With car showrooms and dealerships reopening from June, the month marks a significant improvement from the year on year comparisons for May and April (89% and 97%, respectively)," he said.

"New car production will be significantly down this year, but there will be a requirement for people to replace vehicles and we expect there to be a shift to a demand for used cars in the autumn."

He continued: “Today’s figures also highlight a growing demand for electric and hybrid vehicles, which represent 21.7% of new registrations this year.
"These figures will continue to increase as more EV product with longer range becomes available and more charging infrastructure boosts driver confidence."

Ashley Barnett, head of consultancy at Lex Autolease, said: “The coronavirus outbreak has proven extremely challenging for the new vehicle market, but even during the height of lockdown, monthly EV registrations were still up year-on-year.

“We see emerging from lockdown as a clear opportunity to accelerate the progress that’s already been made in terms of cleaning up our roads – especially because a shift towards more flexible working patterns and the need for less business mileage could make EVs more practical for more people.”

The appetite for electrification is increasing among fleets, with leasing companies reporting record levels of demand from company car drivers, according to the June digital edition of Fleet News.

Company car drivers will pay no tax on a pure EV this tax year, while drivers of PHEVs are also enjoying much more favourable rates.

The RAC’s Rod Dennis said that it was a "significant milestone" that electrified vehicles of all forms accounted for more new cars than diesels, last month.

He continued: “Registrations of pure battery electric vehicles continue to remain strong, a trend that will hopefully continue as more come on to the market."

Although, he said: "We are yet to see how the appetite for new cars among both fleets and private drivers will be affected by the coronavirus and a possible economic downturn."

He added: “The number of new plug-in hybrids registered last month, while still strong, was far below pure electric vehicles.

"This is something to watch in the coming months as manufacturers begin to introduce new hybrid options for their existing vehicle models.

"It will be very interesting to see if more drivers opt one of these rather than commit to a vehicle entirely powered by batteries.”

Commenting on the overall new car market, Michael Woodward, UK automotive lead at Deloitte, said: “Despite the year-on-year decline in sales, these results will have exceeded many people’s expectations.

“Dealerships have worked hard to encourage consumers back through their doors. However, the full scale of these efforts may not be reflected in June’s figures as supply issues delay some registrations.”

Karen Johnson, head of retail and wholesale at Barclays Corporate Banking, added: “Looking ahead, further questions arise around how changing patterns in working environments and consumer attitudes might impact on car sales.

“On the one hand, many people are working from home and so don’t need a car to get themselves to work every day. Yet on the other hand, people are being advised to stay away from public transport and so may well need their own vehicle to simply get them from A to B.” 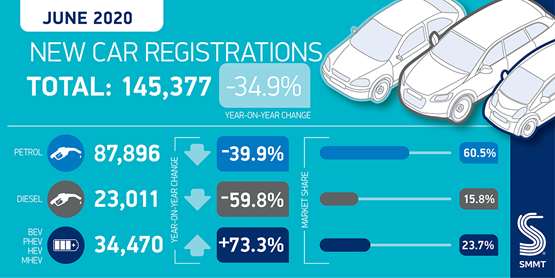 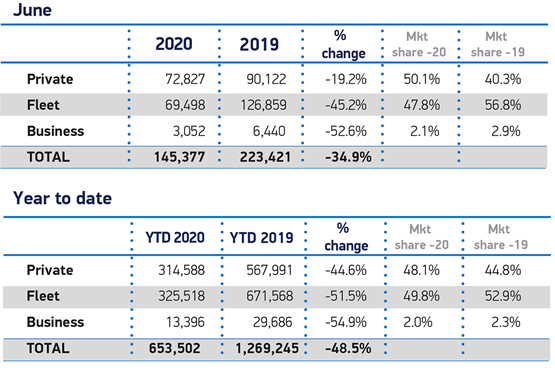 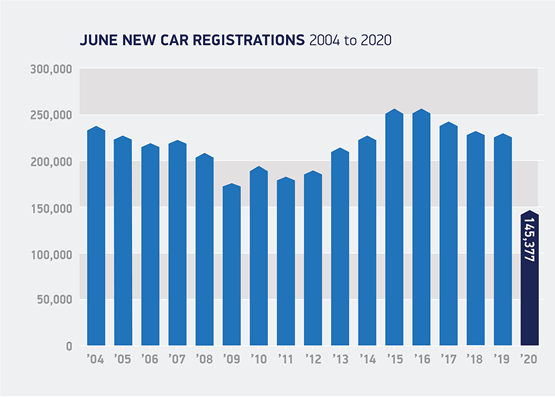 Medium-sized battery EVs, such as the Nissan Leaf, can be on average 14% cheaper to run than equivalent diesels today, Transport and Environment study claims.