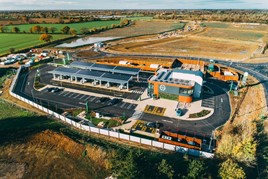 The company announced the new service when it officially opened its Electric Forecourt in Braintree, which will enable 36 vehicles to be charged at the same time at up to 350kW.

“By including the planting of 100 trees for every electric vehicle leased through the service and providing net zero carbon energy to charge all the vehicles, we’re making EV driving greener, cheaper and more straightforward than ever before.”

Gridserve said the tree planting will help to minimise the carbon emissions from supply chain processes, such as manufacturing.

It said the leasing service is designed to bring the cost of driving electric below that of petrol or diesel cars.

An example it gives of this is a 259-mile range Mercedes-Benz EQC 300kW AMG Line 80kWh, which would cost £563.05 (ex. VAT) per month to lease for 36 months (six-month initial at 8k miles per annum), including Electric Forecourt charging.

Robert Gordon, CEO of Hitachi Capital (UK), added: “Our partnership with Gridserve is a total game-changer for electric mobility.

“Not only are we providing electric vehicles at some of the most competitive rates on the market, but we are at the same time developing a network of rapid, reliable and renewably powered Electric Forecourts that will fast-track the electric vehicle revolution in the UK as we prepare for a zero-carbon future.”

The Electric Forecourt in Braintree is the first of more than 100 in the UK Gridserve is planning to build in the next five years as part of a £1 billion programme.
Together with Gridserve, it was funded by Hitachi Capital (UK), Innovate UK and OZEV.

Electricity is generated from both the solar power canopies above the chargers and a network of hybrid solar farms, also operated by Gridserve.

Drivers charging at the Electric Forecourt will initially pay 24p per kWh of energy (including VAT), meaning a typical charge from 20% to 80% costs under £10 for an average-size electric vehicle on the market today.

Gridserve has plans to introduce a tiered pricing structure in the future.

Paul Holland, managing director for UK Fuel at Fleetcor, feels that the UK government should capitalise on EV developments and help fleets make the switch.

Fleets are ordering electric vehicles in increasing numbers, but the latest company car registration figures show a dramatic decline in the overall market.