NetX adapter allows three EVs to charge from one socket 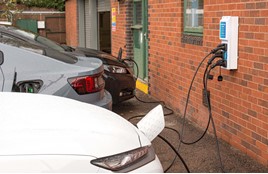 Innovate UK is supporting a new project to trial the use of a three-socket EV charger that can be connected to a single charge point.

The NetX device has been developed to help increase the provision of charging more quickly.

When installed, it enables three vehicles to share the capacity of a standard 7kW charger.

Mike Potter, managing director of project partner DriveElectric, said: “With the UK now on course to phase out the sale of new petrol and diesel cars and vans by 2030, we need to make sure that everyone has the ability charge an EV.

“The NetX technology has the potential to triple the number of EV charging sockets in a cost-effective way, potentially allowing people who can’t charge at home more opportunity to charge at work or at public charging sites.”

The project is searching for suitable public charging locations to install chargers and aims to install around 100 NetX chargers.

In one of its first test locations the NetX charger delivered three times more energy than the existing single socket had over a similar timeframe, as well as five times more charging sessions.

As part of the project, EV drivers were invited to take part in a survey about how easy (or difficult) it is to charge their car.

The survey, which a total of 996 EV drivers responded to, found that 82% charge most often at home, and 8% at work.

The majority (85%) of people said they want to pay for public charging by contactless debit or credit card payment or automatic payment on plug in. Only 10% want to pay by smartphone app and less than 5% want to pay by RFID card or tag.

Of those surveyed, less than a quarter (22.75%) said that public rapid chargers always worked.

When asked about accessibility of (non-rapid) workplace chargers, more than 40% of respondents said that they” occasionally” or “often” had to queue or to give up, or could rarely find an available charger.

Dan O’Hara, CEO of EB Charging, added: “More and more fleets and individuals are switching over to EVs. As a leading provider of EV charging infrastructure for councils and businesses, we welcome this move. But charger capacity must increase to support increased EV uptake, and we see the NetX development as a powerful tool to increase capacity at low cost.”