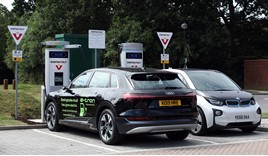 It has so far delivered more than 500 charge points, with the latest additions being installed across the UK, including Warwickshire (15), Greater London (six), and Oxfordshire (four).

InstaVolt’s chief executive officer Adrian Keen said: “The expansion of our public charging network across the UK will help drivers make the switch to EVs by reducing range anxiety.

“We’re incredibly proud to be helping the country move along the roadmap towards the green vehicle revolution, with March resulting in a record number of installations of rapid chargers.

“We couldn’t have achieved this without the effort from the installation team who worked incredibly hard during March to deliver the high number of new reliable chargers across the UK.”

He added: “We will use this record month to push on and continue to deliver easy to use, rapid chargers to the masses for years to come.” 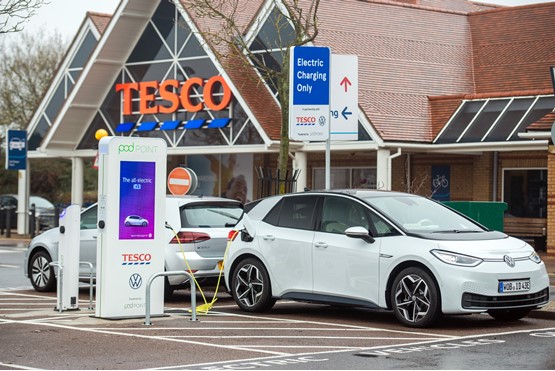 Tesco, in partnership with Volkswagen and Pod Point, is installing free charging points at 600 supermarkets around the UK.

The partnership has now provided its 500,000th free top-up – the equivalent of three million kWh of free, carbon neutral electricity has been used.

Based on the average new petrol or diesel car sold in the UK, the scheme has reduced carbon emissions by approximately 2,120 tonnes - the same as more than 2,770 acres of forest will manage in a year.

The Tesco Extra in Slough has been the busiest supermarket for free charging - with the sockets used more than 10,000 times.

It finished ahead of Tesco supermarkets in Stourbridge, Crawley, Altrincham and Bromley by Bow in the top five.

Making up the rest of the top 10 were the Tesco supermarkets in Watford, Orpington, Elmers End, Havant and Lichfield.

Director of Volkswagen, Andrew Savvas, said: “Our partnership with Tesco and Pod Point emphasises our commitment to carbon neutral mobility for all and we’re delighted to have reached this milestone - helping owners of all electric car brands top up with free renewable energy while they’re doing their grocery shop.”

Tony Hoggett, chief operating officer at Tesco, added: “We are committed to reducing carbon emissions in all our operations and aim to be carbon neutral in the UK 2035.

“As part of this we want to encourage our customers to play their part with the rollout of free-to-use EV chargers to 600 of our stores.

“Providing customers with charging points offers them a sustainable choice and giving them the opportunity to charge their car for free while they shop is a little help to make this easier.”

Erik Fairbairn, Pod Point founder and CEO, concluded:  "Reaching the 500,000 charges milestone is testament to the growing appetite for EVs as well as the ease and convenience of the charging experience.

“The partnership is making great strides towards our goal of delivering the nation’s largest retail EV charging network – one that is reliable, accessible, secure and free making it even easier for drivers to choose electric and accelerate adoption.

“We look forward to powering up even more local areas as we continue our roll out." 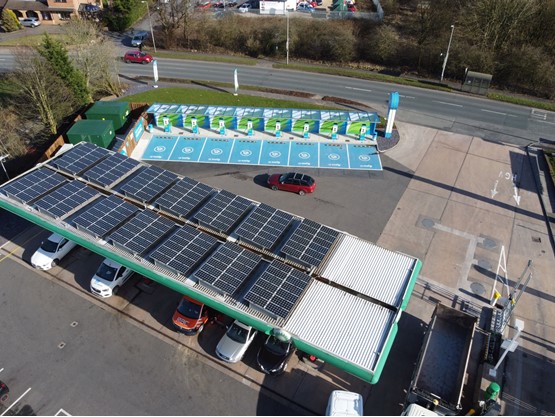 MFG has appointed Energy Assets Networks (EAN) as an infrastructure partner to support the rollout of its nationwide ultra-fast EV charging network.

The independent forecourt operator recently announced a £400 million investment that will see 3,000 ultra-rapid 150kW and 350kW EV charge points installed at 500 sites across the UK by 2030.

The programme underpins MFG’s dual fuel strategy to enable a transition from fossil fuels to EVs to help decarbonise the economy.

EAN is a distribution network operator and will be working alongside MFG to provide both technical expertise to energise hubs and asset values linked to infrastructure adoption. EAN anticipates partnering with MFG on up to 30 sites during 2021.

Ed Chadwick, director, EV and strategic projects at MFG, said: “We are at the beginning of an incredibly exciting journey for MFG - and for the country – and EAN will play an important commercial and technical role as we kick-start the massive upscaling of our EV charging network.”

Currently, ultra-rapid 150kW chargers can provide around 100 miles of range in approximately 10 minutes but as car battery technology develops, MFG will be increasing charging speeds to 350kW. This will result in recharging times comparable to petrol and diesel refuelling, it says.

MFG’s initial focus for its EV charging hubs will be on major trunk roads and urban areas. In London alone, the company’s planned roll-out will treble the current number of open network ultra-rapid 150kW EV chargers.

From 2022 onwards, at least 50 additional hubs will be added to the network each year, with a significant number sited on the strategic road network.

Jayson Whitaker, managing director of EAN, said: “We know that on-route charging will be vital in avoiding the range anxiety that could otherwise hold back EV adoption, so we very much look forward to playing our part in helping the company deliver its ambitious plans for a lower carbon future.”

A new fleet charging management system has been launched by Centrica to help fleets with drivers charging commercial vehicles while working remotely.

MFG plans 2,800 ultra-rapid EV Chargers across UK in the next 10 years

Independent forecourt operator MFG is investing £400m to expand its network of EV chargers in the UK, with 2,800 new units.