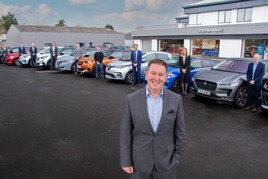 Charles Hurst Group has invested more than £3.5 million in a fleet of fully electric and hybrid vehicles and an “extensive” charging infrastructure programme.

One in three of the Northern Ireland motoring retailer’s entire fleet of company car and demonstrator vehicles is now either fully electric or a hybrid model.

An investment of £200,000 in charging infrastructure across all eight of its customer sites, has also increased the total number of available charge points to more than 80.

Group operations director, Jeff McCartney, said: “This £3.5 million investment in our electric and hybrid vehicle fleet and infrastructure, about a third of our overall company fleet, represents our commitment to achieving our collective vision for a greener, more sustainable economy here in Northern Ireland.

“Our industry has an important leadership role to play, not only because of the ambitious and welcome targets that have been set out for the rollout of electric vehicles to replace diesel and petrol, but because we have an opportunity to lead by example in our own businesses as well.

“We know the evidence suggests that not only will electric vehicles be pivotal in meeting climate change targets, but there are also thousands of pounds in cost-savings that households can make over time.”

Charles Hurst Group is a division of Lookers, one of the UK’s principal automotive retail and distribution groups. It represents 22 automotive brands across eight sites.

Mercedes is continuing with the expansion of its electric vehicle (EV) line-up with the introduction of the EQB, a seven-seat SUV set to arrive in 2022.

Smart technology could unlock the potential for the rollout of thousands of electric vehicle (EV) chargers, according to UK Power Networks.