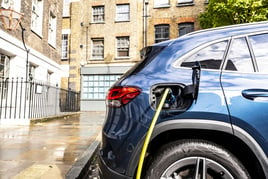 A Competition and Markets Authority (CMA) investigation has found that some areas of the development of the UK’s charging infrastructure are facing problems which will hinder the roll-out of electric vehicles (EVs).

In particular, the CMA is concerned about the choice and availability of charge points at motorway service stations, where competition is limited.

It also says that the roll-out of on-street charging by local authorities, which many drivers will rely on, is too slow and rural areas risk being left behind with too few charge points due to lack of investment.

Concerns about the reliability of charge points, difficulties in comparing prices and paying for charging, risk reducing people’s confidence and trust.

The CMA has set out four principles to ensure that using and paying for charging is as simple as filing up with petrol and diesel.

Currently, Electric Highway provides 80% of all charge points at motorway service stations, excluding Tesla charge points which currently can only be used by Tesla vehicles.

However, Tesla will enable cars from other manufacturers to use its Supercharger network later this year, according to Elon Musk.

The company’s CEO made the announcement on Twitter, but no further details of the arrangement have been outlined.

The CMA is concerned that these arrangements make it difficult for other operators to provide competing charge points at motorway service stations. This, it says, could result in drivers losing out on the benefits of competition such as greater provision, more choice, competitive prices and reliable, high-quality charge points.

It has set out measures which it says will ensure a national network of electric vehicle charge points is in place ahead of the 2030 ban on the sale of new petrol and diesel cars.

Andrea Coscelli, chief executive of the CMA, said: “Electric vehicles play a critical role in meeting net zero but the challenges with creating an entirely new charging network should not be underestimated.

“Some areas of the roll-out are going well and the UK’s network is growing – but it’s clear that other parts, like charging at motorway service stations and on-street, have much bigger hurdles to overcome.

“There needs to be action now to address the postcode lottery in electric vehicle charging as we approach the ban on sales of new petrol and diesel cars by 2030.”

As part of its market study into EV charging, the CMA examined whether the industry could deliver a comprehensive UK charging network that works competitively and that people can trust.

The CMA’s key recommendations are that:

The Government’s transport decarbonisation plan promises an electric vehicle infrastructure strategy by the end of the year, which will set out the its vision for infrastructure rollout, and roles for the public and private sectors in achieving it.

It says it is also working with Ofgem on the deployment of the Energy Networks Association’s £300 million Green Recovery Scheme, announced in May, to accelerate motorway service area and wider EV charging infrastructure investment.

The transport decarbonisation plan makes a commitment to support the private sector to deliver at least six rapid charge points at every motorway service area in England by 2023, by investing £950m to upgrade electricity connections at motorway service stations.

The UK has around 25,000 charge points currently and, while there is still uncertainty, forecasts suggest more than 10 times this amount will be needed by 2030.

“Our recommendations will promote strong competition, encourage more investment, and build people’s trust, both now and in the future,” continued Coscelli.

Public charge points per 100,000 of population by UK country and region 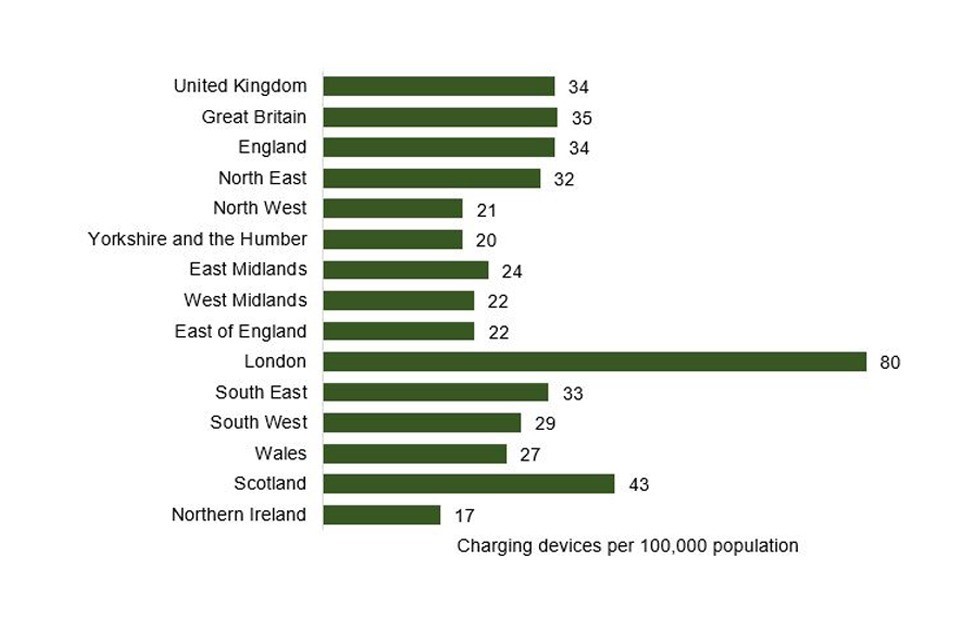 RAC director of EVs Sarah Winward-Kotecha welcomed the CMA’s findings. “Drivers need complete confidence that they will always be able to charge up quickly and easily when they’re making longer journeys,” she said.

“When more rapid public charge points are added in the locations where they are needed the most, then the term ‘range anxiety’ will become a thing of the past and in turn the switch to electric driving will accelerate at pace.

“While there is still some way to go before rapid charge points are as commonplace as fuel pumps, things are changing fast.

“There is a huge amount of investment taking place, particularly at motorways where older chargers are now being replaced with the latest technology which offers much faster charging.

“We’d also like to see motorway provision supplemented by many more ‘regional hubs’ that give those in towns and cities, especially those for whom charging at home isn’t an option, easy access to rapid charging.”

The RAC says that it is important to realise that for those who are able to charge at home, most won’t have any need to use the public charging network for their day-to-day local driving as Government figures show the average car trip is only around eight miles, and with nearly six-in-10 of all trips being under five miles in length.

Americo Lenza, portfolio director at British Gas, says that the CMA’s report highlights just how crucial it is that we continue to accelerate the roll-out of charge points across the UK to avoid “large swathes” of the population being left behind on the journey towards electrification.

“As sales of electric vehicles continue to rise each month, charging infrastructure and energy systems will need to be upgraded to cope with the demand and support drivers,” he said.

“While inroads have been made to install charge points at home, work and leisure destinations, we need to see an accelerated roll-out of on-street charging to support the widespread adoption of EVs.”

British Gas research shows that 83% of UK motorists agree that it’s easier for drivers with a driveway to switch to EVs. “It's unfair that those without one risk missing out on the electric revolution,” added Lenza.

"The CMA has said that public charging infrastructure must be improved by 2030 as a matter of urgency, and this follows hot on the heels of the SMMT's claims that 2.3 million charge points need to be set up in the next decade to ensure the UK can successfully transition to a net zero economy," he said.

"We recognise the urgent need to address charge point disparities in the UK, but we must get the balance right between Government intervention and allowing the private sector to continue the incredible work that has been underway these past three years where we have seen the quality of the networks improve greatly.

"It is up to businesses in the charging network sector to ramp up efforts to meet the Government’s targets through growth, innovation and creativity."

Back in March this year, InstaVolt documented its record number of charging activations, installing an additional 62 rapid chargers throughout the UK in one month.

Keen continued: "We are committed to continuing this expansion rate, with plans for 5,000 chargers to be installed by 2025. Our strategy is for nationwide growth to ensure all areas of the country have access to reliable charging, not simply targeting highly populated, affluent and roadside locations. This is key to giving drivers the confidence they need to switch to EV and ensure we can remain on track with our 2030 targets.”

The RAC has partnered with British Gas to offer an electric vehicle (EV) charger and tariff to support drivers of plug-in cars.

ChargedEV, a provider of electric vehicle (EV) charging infrastructure, has been bought by the parent company of Northgate Vehicle Hire, Redde Northgate.