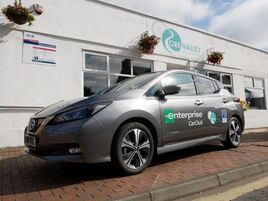 The Plugged-in Communities Grant Fund provides funding for not-for-profit housing associations, housing cooperatives and community groups in Scotland allowing them to secure a zero-emission car club vehicle for use by their tenants and the wider community.

The scheme, funded by Transport Scotland and delivered by Energy Saving Trust, offers affordable access to the benefits of modern EVs, while reducing the need for individual car ownership. This supports the Scottish Government commitment of reducing car kilometres travelled by car by 2030.

The fund has now supported 15 projects within Scotland;12 housing associations and three community groups have received funding for a total of 63 electric vehicles.

Andy Robinson, head of fleets, infrastructure and low carbon consumers at Transport Scotland, said: “EV car clubs are quietly becoming a huge success story in Scotland. Demand is growing, and as we can see from usage levels, they can be valuable tools in helping communities travel across Scotland which can also shake up long held beliefs about traditional car ownership.

“The Scottish Government has committed to ensuring that there is a just transition to net zero. This means ensuring we leave no person or community behind from the benefits new technology can offer. Plugged in Communities is helping to include more people in this net zero journey.”

Neil Leckie, senior programme manager at Energy Saving Trust, added: “The adoption of EVs is growing at pace throughout Scotland, supported by a robust public infrastructure and the interest-free loans available through Energy Saving Trust.

“The transition to EVs will continue to play a crucial role in reducing carbon emissions and enhancing air quality in line with Transport Scotland’s decarbonisation strategy.”

The London Assembly has called on the Mayor of London to work with Transport for London (TfL) and London’s boroughs to work together to expand their use.

Assembly member (AM) Shaun Bailey, who proposed the motion, said: “Car clubs tackle congestion reduce demand for parking, and improve air quality, but we are not doing enough to encourage them. The Mayor and Transport for London need to look again at facilitating car clubs across the capital.

“Any review should consider expanding the number of car club parking spaces, rolling out rapid charging points, and ensuring new developments have access to the service.

“If we can make it easier and more accessible, then more people and businesses will be able to reduce their private car use and save money, easing pollution and congestion on London’s roads.”

According to CoMoUK’s 2020 London Car Club Annual Report, each car club vehicle in London takes 23.5 vehicles off the road.

AM Caroline Pidgeon, who seconded the motion, said: “While car clubs are not the answer to all of London’s transport challenges, they have a critical role to play in terms of making our roads a better place.

“By giving people a real alternative to traditional car ownership they have been shown to dramatically reduce parked cars on our roads. And by using newer and less polluting vehicles they can play a key role in reducing pollution in the capital.”

New software from Enterprise Rent-A-Car will give detailed benefit-in-kind (BIK) tax information from the use of daily rental and car clubs.

Enterprise Car Club vehicles are being used as part of a trial reduce transport emissions in the West Midlands by the University of Warwick.

Ubeeqo is launching a new car club with Bellway Homes at a housing development in south-west London.