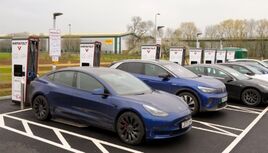 There were more than 400 new rapid and ultra-rapid chargers from over 22 different networks added to UK network in first quarter of the year, according to new figures from Zap-Map.

The quarterly data shows the number of ultra-rapid charge points has grown by 11% to 1434.

While these devices account for less than 20% of the charge points, they make up around 60% of the available power capacity.

Slow and fast chargers, from 3-22kW chargers, typically installed either at on-street locations for overnight charging or destinations for top-up charging also increased by average of 7%.

InstaVolt installed the highest absolute number of new charge devices (67), 65 of which were over 100kW power rating. These can be found at McDonald’s, Costa Coffee and KFC locations among others.

Gridserve Electric Highway has been busy upgrading the legacy Ecotricity chargers, replacing the old units with newer technology, and often adding greater numbers with more units at each location.

Pod Point, which has traditionally been associated with AC destination charging, it is increasingly a player in the rapid charging market having added 45 new rapid chargers, mainly at Tesco and Lidl stores.

With the energy prices rising, the cost of charging on the public network is also increasing.

As of mid-March the average cost of ultra-rapid and rapid charge was 44p per kWh. This equates to around 13p per mile based on average EV efficiency of 3.5 miles per kWh.

However, in comparison with ICE (internal combustion engines) vehicles, having an average petrol price at £1.63 per litre and diesel at £1.77, motorists can expect to pay at least 20p per mile on all but the most efficient models.

In addition, some EV drivers enjoy cheaper charging at home with prices around 20p per kWh, or even lower with off-peak EV tariffs or using electricity from solar panels.

Melanie Shufflebotham, co-founder and chief operating officer at Zap-Map, said: “EV charging use cases are diverse and we need a diversity of charge speeds to match.

“Ultra-rapid chargers, which can add over 100 miles of range in minutes, are a crucial area of investment because they make long journeys easier.

“EV sales are taking off, so the fact that ultra-rapid chargers are keeping step with sales great news for EV drivers old and new, who might be concerned about range anxiety.”

InstaVolt has launched one of the UK’s largest EV charging hubs in Banbury, Oxfordshire, as part of the organisation’s commitment to improving the country’s charging infrastructure.

Work started on the Banbury hub expansion in January 2022, adding eight 150kW Alpitronic chargers to the already stationed eight 125kW chargers. This takes the total number to 16 rapid chargers at the site.

In addition to the new rapid chargers, the site’s overall services have been upgraded with additional lighting, wider access spaces and two longer spaces to accommodate the rising number of electric vans and fleet vehicles.

InstaVolt’s chief executive officer, Adrian Keen, said: “InstaVolt is committed to providing real solutions to consumers’ demands and as a company, we go further than just installing charge points where we see demand – we work on the overall experience.

“As well as expanding the site, we have introduced better lighting and a variety of parking bay sizes to accommodate different vehicles, all whilst continuing to offer class-leading reliability and simple, contactless payment.”

50,000 EV chargers to be installed at schools, colleges and universities

The education sector will play a major part in the UK’s roll-out of EV chargers, with up to 50,000 points expected to be installed at schools, colleges and universities.