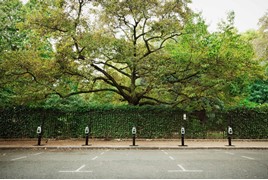 The analysis, conducted by the FairCharge campaign, shows that a total grant value of £104.5 million had been spent on the Electric Vehicle Homecharge Scheme (EVHS) since the scheme’s inception in September 2014.

In comparison, the DfT spent £6.8 million of grant funding on the On-street Residential Charging Scheme (ORCS) since the scheme was established in 2017. The total spend on the EVHS is fifteen (15.37) times more than the ORCS.

The Government have recently announced the EVHS will no longer accept applications from homeowners living in single-unit properties.

FairCharge, a grass-roots campaign with over 80,000 supporters headed by Quentin Willson, called the figures ‘concerning’ and claimed that Government policy decisions had allowed a sense to develop that EVs were the preserve of the wealthy.

FairCharge has also been highlighting the other barriers that those without access to off-street residential parking are facing if they are to make the switch to EVs, including leading a push to reduce the 20% VAT rate on public charging so that it is equal to the 5% rate for those who charge at home off-street.

The VAT differential is among one factor that a Resolution Foundation published last week estimated could see those with off-street parking paying £139 a year in fuel costs versus £712 for those without.

Quentin Willson, who is leading the FairCharge campaign, said: “Of course, the EVHS has been great in that is has led so many to make the switch to EVs – but it can’t be right that there is such a big a gap between public money spent supporting off-street and on-street charging. Figures like this add to the feeling that some have that EVs are the preserve of the wealthy.

“If the transition to net zero is to be successful then it must be fair. When it comes to EVs, it just isn’t fair that those who have access to driveways or garages have so much more Government help to support their charging needs than those – on-average much poorer – people who do not. Our FairCharge campaign is aimed at preventing exactly this sort of injustice.”

Government to deliver 300,000 chargers by 2030 in new EV infrastructure strategy

The vast majority of EV drivers use the UK’s public charge points, with 40% using public chargers at least once a week, new data from Zap-Map suggests.

April saw a record increase in EV charge points, with 1,213 new charging devices installed in the month, according to new figures published by Zap-Map.