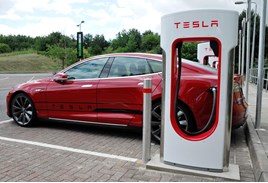 Tesla is allowing non-Tesla vehicles in the UK to use its Supercharger network, as part of a pilot scheme.

The electric car maker has opened 15 Supercharger stations, with 158 charge points, to drivers of non-Tesla vehicles across the UK.

Drivers must use the Tesla smartphone app to access the chargers. Pricing is set at 60p per kWh, for non-Tesla owners, although a monthly subscription of £10.99 will provide cheaper rates.

A statement issued by Tesla said: “Access to an extensive, convenient and reliable fast-charging network is critical for large-scale EV adoption. That’s why, since opening our first Superchargers in 2012, we have been committed to rapid expansion of the network. Today, we have more than 30,000 Superchargers worldwide.

“Tesla drivers can continue to use these stations as they always have, and we will be closely monitoring each site for congestion and listening to customers about their experiences.

“More customers using the Supercharger network enables faster expansion. Our goal is to learn and iterate quickly, while continuing to aggressively expand the network, so we can eventually welcome both Tesla and non-Tesla drivers at every Supercharger worldwide.”

Tesla chargers are equipped with two connectors. One for Tesla vehicles and a CCS connector. Tesla has not confirmed the maximum charging speeds available to non-Tesla owners at the points.

Last year, Tesla launched a similar trial in the Netherlands. It also provides non-Tesla drivers with access to its Supercharger network in Austria, Belgium, France, Norway, Spain and Sweden.

April saw a record increase in EV charge points, with 1,213 new charging devices installed in the month, according to new figures published by Zap-Map.

Councils will be expected to work closely with fleets to ensure their needs for public charge points are taken into consideration, the Government says.