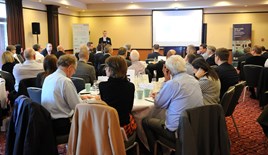 In a wide ranging debate, fleet decision-maker revealed the challenges they faced in ensuring safe use of mobile phones, combatting drug driving and key elements of a grey fleet policy.

Two fleet managers introduced strict mobile phone policy (total ban on mobile phone use).  Drivers are not permitted to use hands-free phones while driving. The policy applied to all of the company car drivers including management (the management was to set an example).  The company policy needed to be signed by every driver of the company’s vehicles.

One of the companies was an LPG gas provider. The other one operated in transport industry.

Other fleets in their policies highly recommend not to use mobile phones in vehicles at all times but it is set only as a recommendation/ guidance.
One of the fleet managers would like to prohibit hands–free phone use but from an operational point of view it is not possible.  His company drivers need to talk on the phone (as a primary method of communicating) because of the schedule and they have many jobs coming through.

Employees (for example a sales team from one of the companies) claim that with banning all mobile phone use while driving they will end up working longer hours because they will have to allocate extra time for replying to emails; returning missed calls etc.; and they are not keen on changing their working hours.

On the one hand companies are aware of having technologically equipped vehicles but on the other hand they would like their drivers not to be distracted from driving (because of safety issues).

Everyone in the discussion agreed that even when using hands-free phones drivers react more slowly and are less aware of what is happening on the road.

The safety issue is the main reason for banning all mobile phone use while driving.

The summary of the discussion:

“It is difficult to monitor if everyone follows a company mobile phone policy. Unless someone gets caught one cannot prove that this particular driver broke the rules. There is an element of trust required.”

“There is a need for educating drivers. As fleet managers claim the most important thing is ‘getting started’ with the change. In the past divers had issues with using seat belts, tracking, Telematics (which was perceived as ‘Big Brother’) but now very often they are natural things for drivers.”

“Those companies who introduced no mobile phone use policy communicated it very clearly to their drivers – there were presentations including safety aspects of the policy and every driver had to read and sign the document.”

Fleet managers couldn’t describe the consequences of violating the policy.

They just mentioned that so far no one has been caught and they cannot be sure whether the drivers follow the rules.

On January 1, 2018 a new mobile phone policy was introduced.

The company prohibited all mobile phone use while driving company vehicles (even hands-free phones).

Mobile phones must be placed in the box or in the boot. It was a board’s decision which was not discussed with employees or fleet department. This decision was based on health and safety reasons (they had four months to prepare for it – informing and educating drivers etc.).

Every driver had to sign the new policy. There was no discussion about finding a ‘happy middle ground’- the rules were prepared by the board.

Drivers are not allowed to use mobile phones in the company vehicles.

Some of the employees can opt for payment (allowance) and buy their own vehicles (grey fleet).

The company’s approach is: “If there’s an accident when you are on the phone and we are paying your allowance, that’s a company’s car. You are not allowed to use hands-free phone while driving”.

Exemptions - there is no clarity about what can be treated as an emergency or a unique situation, it still needs to be clarified in the policy.

Bluetooth is blocked on every new company’s vehicle bought from January 1 (it’s not applicable to vehicles bought earlier).

Although it includes occasional private car drivers, grey fleet is most commonly thought of in terms of cash allowance or salary sacrifice drivers, where these are able to claim for business mileage. Although both are covered by the grey fleet policy.

There is an awareness of some drivers that are falling outside of these two categories and occasionally using private cars to take people between sites or on short journeys i.e. to the station/airport but not claiming any mileage expenses. It is unknown to what extent their vehicles meet the grey fleet policy requirements. In a large organisation these drivers largely fall under the radar as they are difficult to identify and therefore manage.

The take up of cash allowance is increasing, specially where it is generous and the driver is able to make saving through buying or leasing a car of lower value that their allowance.

Where does responsibility sit?

Management of grey fleet typically sits across a number of different departments within an organisation and this can vary between organisations.

HR or line manger signing off employees’ eligibility to claim business mileage and checking business insurance. An audit and compliance department may also be involved in this.

HR is responsible for reimbursement of mileage.

The challenge is in checking the validity of individual mileage claims and monitoring the overall grey fleet mileage. Grey fleet driver behaviour is not managed in the same way as company car drivers.

Licence Bureau – for licence checking. The advantage of this is that is an ongoing process and any infringement is flagged automatically rather than relying on the driver to disclose this or waiting to be asked at an annual update. The process is slower for those with a non-UK licence as this requires manual checking. Use of Licence Bureau can also enable fleets to secure lower insurance premiums.

Drivers are required to supply valid driving licence, insurance and MoT and obliged to declare and changes to these.

None of the fleets required their drivers to have roadside assistance.

Restrictions on the type and age of grey fleet cars vary.

Whilst some companies set and age limit of five years, others give drivers free reign to choose whatever car they like. An example was given of a grey fleet car being 25 years old. However, drivers were encouraged to use pool cars on longer journeys as they were more environmentally friendly.

Drivers are issued with the fleet policy on registering as a grey fleet driver but reminders of the policy are rare or infrequent.

Some companies restrict the use of other mobility options to grey fleet registered drivers i.e. drivers are expected to use their own vehicle rather than taking a pool car or the train (unless they are travelling to London).

Occasional use grey fleet drivers are generally encouraged to only use their own vehicles as a last resort, with pool cars, public transport or short-term hire being the preferred mode of travel.

The benefits of telematics or apps help manage grey fleet is clear. It will also benefit the drivers in automating their mileage claims. The challenge is to convince drivers to have their private cars monitored in this way even though it can be turned off for private journeys.

The impacts of the new tax will to some extent depend what is in their original contract i.e. cash allowance or company car, their ability to switch and the value of the car they choose i.e. above £40k they will be penalised for taking a car rather than cash.

It was suggested that drivers are not fully aware or clear of the tax implications and that the options to take cash or car should be reviewed at regular intervals as with leased cars.

Fleets felt that one of their biggest challenges was to improve safety. The two biggest issues were educating drivers and creating a culture within the company that promotes safety and gets buy-in at board level.