Air quality debate has made fleet management a ‘dirty’ role 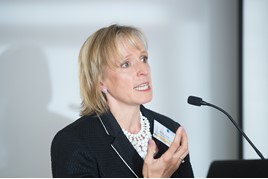 Fleet managers are feeling the pain of being associated with ‘dirty’ diesel vehicles despite often using the cleanest Euro 6 diesel engines.

Speaking at the Fleet200 Executive Club meeting, Monica Guise (pictured), head of sustainable logistics at the University of Birmingham, explained that many fleet operators are “in a difficult position” because they need to operate diesel.

She said: “Isn’t it a dirty word being a fleet manager?

"Because as fleet managers we suddenly have this social conscious that we're contributing to this and there are lots and lots of stats coming out around diesel particulates and air quality.

“We're suddenly feeling put in a difficult position, which is fine for some of us who can run an electric fleet but what about the fleet managers who do not have an alternative to diesel? The longer ranges, the payloads, and all these factors that come into it make it very difficult for us to manage.”

Guise has been able to operate electric vehicles because her fleet has “the perfect profile” with vehicles typically doing 8,000 miles per year around campus and the city. However, there are some larger commercial vehicles that she has not yet been able to switch to electric due to payload.

She has been working with Birmingham City Council ahead of the introduction of the city’s clean air zone in 2020 to look at her fleet and, in her role as head of sustainable logistics, to look at student and staff travel and the air quality, congestion and car parking challenges across the university site and the local area.

“We’ve got £600 million worth of capital projects set out for the next five years so we're a huge organisation,” she said. “We're the third biggest employer behind the NHS and Birmingham City Council.”

She added: “As the city of Birmingham looks at reducing emissions and improving air quality there is a lot of pressure on us to influence behaviour change of how people get to work, how students get to us.”

She also recognises that the university has a role to play in influencing its suppliers.

“We're looking at sustainable procurement,” she said. “When we buy something we ask ‘how are you going to deliver it?’ because we need to influence how those people are delivering and what time they're delivering.”

Read more about the University of Birmingham’s fleet in the October 4 issue of Fleet News.

What are the proposed UK clean air zones (CAZ)?

Fleet in focus: University of Birmingham

Included in this special Fleet200 section are the key points shared at the Executive Club meetings.

The next meeting is on November 21 at the Mini Plant in Oxford.

If you're a fleet decision maker interested in joining the club, email kate.howard@bauermedia.co.uk. Membership is free.