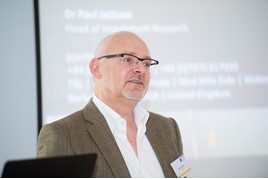 Failing to properly manage driver fatigue and stress has a detrimental effect on both an organisation and its employees, according to the TRL (Transport Research Laboratory).

Speaking at the Fleet200 Executive Club meeting at Dunchurch Park in Rugby, Dr Paul Jackson (pictured), the organisation’s head of impairment research, said one-third of all road traffic collisions are considered to involve someone who is driving as part of their job at the time.

“One of the issues that is rarely considered is the whole issue of mental well-being, and this is something we should all have an awareness of,” he said.

Jackson said there is little data available about UK drivers and their mental well-being, but research in the US found that 29% of HGV drivers suffer from depression, just under 20% suffer from chronic fatigue and just under 15% suffer from severe anxiety.

“We know that drivers who experience mental health problems, who experience fatigue and stress are much more likely to be involved in incidents and generally display poor driving performance,” he said.

“The sad reality is most people don’t calculate the costs associated with these issues.

“These include insurance costs, fuel consumption rates, bent metal and associated costs, time off the road, training and recruitment costs, not to mention the increased risks of accidents and general safety.”

Jackson said there is a “human cost” as well. These include anxiety, stress and chronic fatigue, and a fall in morale which could eventually lead to an employee leaving the business.

However, it is an issue which the vast majority of organisations do not have policies for, despite having them for other areas of risk such as drink- or drug-driving.

“You should ask yourself about how common fatigue is among your drivers, and how common is drug and alcohol use,” said Jackson.

“I’d say that fatigue is about 10 times more prevalent than drug and alcohol use because it is a standard part of everyday for most people.”

Jackson said organisations can measure driver well-being through methods such as surveys, interviews and group discussions.

Organisations can then look at the root causes and devise a plan to address these.

This could look at areas such as the number of deliveries or jobs a driver is expected to do per day, shift patterns, the times drivers are expected to be on the road and low hourly pay.

“We have operational practices that are standard, common, accepted and expected, but which may inadvertently elevate driver stress,” said Jackson.

Included in this special Fleet200 section are the key points shared at the Executive Club meetings.

The next meeting is on November 21 at the Mini Plant, Oxford.

If you're a fleet decision maker interested in joining the club, email kate.howard@bauermedia.co.uk. Membership is free.