Much has been made of the performance of the economy and the automotive industry during the Black Swan year that was 2020.

A period of unexpected and really almost completely unpredictable events driven by a pandemic that started in the almost unheard-of town of Wuhan in the Hubei Sheng province in China.

The impact of the chain of events that sent the COVID-19 virus on a worldwide course of disruption is yet to be realised as the virus continues to affect almost every country in the world.

However, the world continues to spin, and every country has sought to manage matters in the best way that they can with a focus on public health and safety mixed with the need to keep the respective economies moving as best as possible.

In the UK the disruption has been widespread, and the public in many cases seemingly incapable of following rules and guidelines put in place to help them despite also acknowledging the need to try and return to normal life as soon as possible.

For the automotive sector, this Black Swan event accelerated the rate of evolution within the industry.

The shift to online transactions and mouse to house sales were already on the horizon with new entrants to the retail arena in the form of Cazoo and Heycar seeking to succeed where Autoquake, Virgin cars and Tesco had failed over a decade ago.

The manifestation of COVID gave these businesses a boost as once the first lockdown hit in March 2020 and freedom of movement was restricted.

These newcomers often berated as being ahead of real-world retail consumer demand, found themselves in better shape than the majority of retailers to deal with a virtual world of digital media, online transactions coupled with individual delivery to the door of the buyer.

However, the automotive sector showed incredible flexibility and resilience and the need to survive galvanised commercial strategy and it took little time for retailer groups to put themselves in a competitive position and a place where they have needed to be for survival during the year.

The truth behind each lockdown period is another topic worthy of more reflection but as an industry, the automotive sector should be proud of its achievements and agility in making the best of a very difficult market.

The chart below gives a high-level view of what happened to sales volumes by month during 2020 by market sector:

The dramatic drop in sales as a direct result of the first lockdown is evident but so is the boost to sales after socially distanced delivery was allowed and the rewards of migrating to digital sales processes obvious as the year ended.

So, what of vehicle pricing and who performed better than others are the next question.

Cazana has enjoyed a sustained period of commercial success and growth during 2020, solely because the business looks at realtime whole market data and were the only pricing and insight provider capable of providing what is now the new industry standard in data for the entire year.

As a summary, the Cazana retail price index showed an improvement of 7.6% over the full year whilst the average retail price of a car in the UK market dipped slightly by -1.6% to reach £13,600.

Behind the headline data lay a myriad of fascinating movements that challenged the industry in many ways yet also brought significant reward for those able to use data to maximise sales and financial performance.

For the retail consumer focus was on finding the car that met their needs rather than one that was the cheapest necessarily. Those cars that retained value better than the rest were also high on retail consumer shopping lists.

The chart below looks at which model ranges depreciated the slowest during 2020: 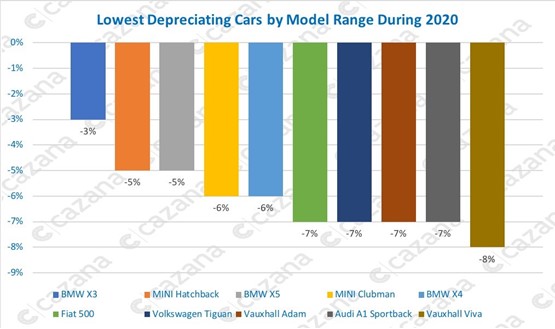 This chart measures the difference in the retail price as a % of original cost new by model range for a 12-month-old car to a 24-month-old car.

Of note is that the BMW Group has 5 of the top spots in the chart with the data showing that the BMW X3 depreciated slower than any other model range.

These latter three ranges have historically shown higher levels of depreciation often driven by front end discounting and oversupply of new cars and it is worth considering whether that has been one of the factors that have influenced the level of pricing performance over the year.

Scarcity of stock is also likely to be behind the high performance of the BMW X5.

This age group encompasses the period of the launch of the GO5 iteration which was in high demand and short supply from launch and is very likely to be why it holds the third spot.

Conversely, the chart below looks at the highest depreciating cars between 12 months and 24-month-old: 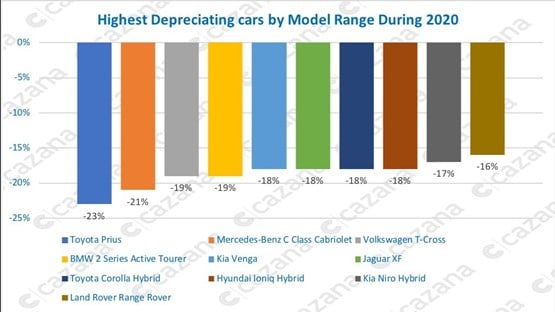 This chart brings an immediate surprise by the fact that the Toyota Prius has recorded the largest drop in residual value throughout 2020.

In the past, the car has been one of the slower depreciating vehicles, although the key to this performance may lie in the dramatic reduction in the demand from the private hire operators.

With the restriction on public movement, the likes of Uber have seen significantly less demand for their services and this is possibly driving this drop in pricing performance.

The other interesting trend in the data is that there are three hybrid cars in the list of top 10 depreciators.

A greater analysis is required on these individual cars, but this could highlight the fact that technology is moving fast and a mix of newer models with better driving characteristics has forced a drop in demand.

Hybrid always has been a “stepping stone” technology and the coming year will be very interesting in terms of hybrid performance overall.

In summary, 2020 has been a year of three messages.

Firstly, it has shown that residual values can increase despite a lower sales volume and secondly, it has exacerbated the need to embrace technology and change.

Finally, it has also shown the need for dynamic realtime whole market data.

2021 will bring more challenges, but the global outlook is positive.