Next generation Nissan Juke to be built in Britain 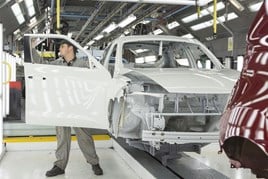 Nissan has announced it will build the new generation Nissan Juke in Britain and it will be investing £100 million in the UK’s biggest car plant in Sunderland.

Following the launch of the second generation Nissan Qashqai in 2013, future Juke allocation points to a secure future for both production lines in Sunderland and the jobs of 34,000 people currently employed by Nissan and its British suppliers beyond 2020.

“With the next generation Juke now confirmed for future production, customers can be assured that Nissan is going to remain the benchmark in the crossover segment for many years to come.

“This announcement also gives security to our Sunderland plant beyond 2020, which the team has earned through many years of hard work and their ability to continually raise the bar on quality.”

Giving a further boost to the UK car industry, Nissan’s European design team in Paddington, London, and European Engineering Headquarters in Cranfield, Bedfordshire, will be instrumental in the development of this new model.

The chancellor George Osborne MP said: “It’s fantastic news that Nissan will be building their new car here in Sunderland and securing valuable jobs for thousands of working people in the area.

“Our ambitious plan to build the Northern Powerhouse means building on the area’s strengths – including manufacturing - and this announcement is an important sign of Britain being chosen as a global leader in car production.”

Next generation Juke is the first model to be confirmed for the Renault-Nissan Alliance CMF-B architecture.

Common Module Family (CMF) is an engineering architecture that drives synergies in all major areas, from purchasing to vehicle engineering and powertrains.

The study of owner reported problems experienced during the first three years of vehicle ownership ranked the Nissan Juke as the number one small car and the Nissan brand fourth overall for vehicle dependability.