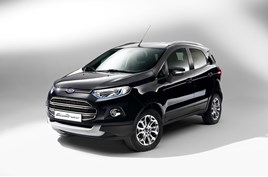 Ford of Europe has announced plans to expand its line-up and increase sales in the fast-growing SUV segment in Europe as well as significantly increase its offering of all-wheel drive (AWD) variants.

Starting early next year with the Edge large SUV, which debuts at the Frankfurt Motor Show in European specification, Ford plans to launch five all-new or redesigned vehicles that will compete in the SUV and crossover space in Europe over the next three years.

Industrywide, SUV sales in Europe are expected to increase from 20% of total passenger car sales in 2014 to 27% by 2020, according to industry analyst IHS.

“Globally, Ford has been at the forefront of SUVs for decades, and is now delivering a European line-up that offers the stylish design, car‑like dynamics and fuel efficiency that are key to why SUVs have become so popular in Europe,” said Jim Farley, chairman and CEO of Ford of Europe.

“As demand for SUVs continues to grow, so will the range that Ford offers – from rugged models with true go-anywhere ability to sporty models designed to suit urban lifestyles.”

Ford is also preparing to launch an enhanced version of the EcoSport compact SUV, which includes offering a version without the spare wheel on the rear tailgate along with improved interior refinement, better performance and sharper driving dynamics. These new versions of Kuga and EcoSport will be on display in Frankfurt.

Millennials account for 24% of Europe’s adult population. The new survey shows one in four Millennials in Europe who intend to purchase a vehicle in the next year say they are considering an SUV.

“The survey makes two important points – the SUV boom in Europe is not a passing fad and young people are not as ambivalent about car ownership as some suggest – especially when it comes to SUVs,” said Roelant de Waard, vice president, marketing, sales and service, Ford of Europe.

“For both rational and emotional reasons, many younger buyers in Europe see SUVs as the perfect choice for them.”

Ford has a deep heritage in SUVs and a comprehensive range in markets across the globe including the EcoSport, Edge, Everest, Expedition, Explorer, and Escape. SUVs accounted for 23% of Ford sales globally in 2013, up from 17% a year earlier.

By the end of the decade, Ford projects SUVs will account for 29% of its global sales spurred by increasing demand in Europe and China. SUV market share in Europe grew from 9% to 19% between 2008 and 2013; and from 7% to 17% during the same period in China.

Ford is also rapidly expanding its line-up of vehicles equipped with AWD technologies, which continue to grow in popularity in Europe.

With the launch of Edge and the all-new Focus RS performance hatchback early next year, Ford will offer AWD or four-wheel drive (4WD) on eight models – about 50% of its line-up – compared with three models in 2012.