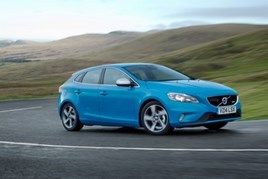 Hybrid power is set to play a key role in helping Volvo win a bigger share of the U.K. company car market over the next four years.

Cleaner, more cost effective petrol-electric alternatives are to be a prominent feature of every model range after 2017, when the Swedish firm begins a major new product offensive by linking a 55kW battery motor with a three-cylinder engine in the next-generation V40.

Claimed to be the most refined unit of its kind, Volvo's entry in the fast-expanding three-pot sector will deliver a choice of 120bhp or 180bhp outputs via a six-speed manual gearbox or the company's new seven-speed dual clutch transmission.

Four cylinder engines with up to 240bhp will also be on offer with front wheel drive or AWD systems, but V40 hybrid technology will be based on the new T5 Twin unit. , which is sized at 1.5-litres and is the first to go into series production at Volvo.

"Work on the unit started in 2013 and we have been determined to give it all the credentials customers would expect of a premium segment engine,” Volvo Cars power train chief Michael Fleiss told Fleet News.

“Everyone claims to have the best three-cylinder on the market, but we know ours really will stand out as the best.

"The engine weighs 25kg less than our two-litre four cylinder motor. Frictional losses have been reduced and a lot of effort has gone into smoothness and overall refinement. This has not been a case of just adapting an existing four-cylinder engine - it is entirely new.”

He continued: “We are not yet ready to release performance data, but I can tell you that our tests are showing that we've exceeded expectations by improving on the target criteria that was set.

“In hybrid form, the engine is producing under 49g/km emissions with potential economy of 134mpg, which is pretty good for a power train system that delivers 250bhp and provides acceleration to 60mph in 6.5 seconds.

"That package should be of strong appeal to the growing number of business motorists who are more environmentally aware but who still expect their cars to provide a rewarding driving experience and we believe it will play an important part in growing our fleet business," he said.

Before the end of the decade, both the 60 and 90 model ranges will have been replaced and company officials have confirmed that a 310-mile range pure electric car will be launched in the large premium sector in 2019.