Emissions scandal costs may rise if residual values are impacted 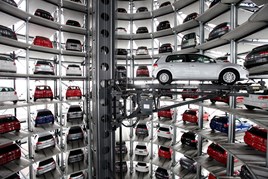 Volkswagen Group is promising to cover any additional costs company car drivers might incur in their tax bill from a change in CO2 values.

The beleaguered carmaker has said that 800,000 cars are affected by CO2 irregularities, with fuel efficiency deviations in some cases between 10% and 15%.

However, it may have to dig deeper if residual values (RVs) are negatively affected, as CAP Automotive now thinks likely.

CAP is claiming 70,000 vehicles are affected in the UK, not including unregistered vehicles, but that figure could rise. Around 45,000 are 2015 registrations, representing 10% of Audi, Seat, Škoda, and Volkswagen volume. The only Audi model impacted is A1.

Dylan Setterfield, senior forecasting editor at CAP, said: “Some impact on future residual values is now likely, but it remains impossible to quantify until full details are known.”

Audi, Škoda, Volkswagen and Seat websites are now carrying a disclaimer in relation to the affected vehicles, with CO2 figures labelled “provisional”.

Company car drivers taking delivery of affected vehicles are being asked to sign a letter from the manufacturer which states that the CO2 value may change, but that it will pay for any additional tax incurred.

However, while still taking orders for affected vehicles, Zenith Leasedrive is advising fleet customers not to sign the manufacturer’s letter.

In an email to fleets, Tim Buchan, CEO of Zenith Leasedrive Holdings, said: “Until such time as we are clear on the implications, please advise your drivers not to sign this letter.”

The leasing industry has tens of thousands of affected vehicles on its books, with hundreds more being added on a daily basis as it maintains a business-as-usual policy.

Gordon Stephen, managing director of Ogilvie Fleet, said:  “Until we know the quantum of the change in CO2 emissions, we will not know whether residual values are likely to be affected.

“We will, however, be contacting the Volkswagen Group companies to make them aware that we will make a claim should residual values be affected by any increase in CO2 and we would expect them to accept this claim if it is proven.”

The UK’s biggest leasing company, Lex Autolease, told Fleet News it was in discussions with the four brands, but it was continuing to offer affected vehicles. It was the same story at LeasePlan, which was waiting on more information from the VW Group before deciding its next move.

Fleet News understands that AstraZeneca has dropped Volkswagen Group vehicles from its choice list, together with “two or three” other companies, according to sources. All are citing corporate social responsibility reasons.

Industry concerns appear to be impacting sales. Figures from the European Automobile Manufacturers’ Association showing deliveries of VW Group cars fell by 0.5% last month, although the Volkswagen did remove 4,000 affected cars from sale in the UK.

The figures come in the wake of a Fleet News poll which showed more than half of respondents (55.4%) would not order an Audi, Škoda, Seat or Volkswagen vehicle with provisional CO2 figures.

Nick Hardy, sales and marketing director at Ogilvie Fleet, said there was still a “strong demand” for VW Group cars. However, he expected none of the VW Group manufacturers to impose charges if customers chose to cancel an order.

The Volkswagen Group has set-aside £1.4 billion for costs relating to the emissions issue.

This equates to £1,700 per car, much more than the £427 per car set aside for the cost of the 11 million cars involved in the diesel emissions scandal, which was £4.7bn in total.

It remains to be seen what the true cost will end up being for the carmaker.