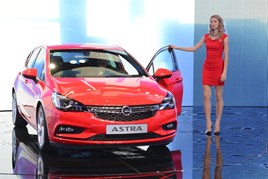 In addition to the official fuel consumption and CO2 information, fuel consumption numbers recorded under the proposed new global WLTP cycle, which is closer to 'real world' consumption, will also be published. Figures will be first released for the new Astra.

In addition, diesel engineers have recently started working on an initiative to implement NOx emission improvements on SCR (Selective Catalytic Reduction) diesel applications. This is a voluntary and early improvement towards the so-called RDE (Real Driving Emissions) legislation that goes into effect in 2017.

“The events and discussions in the last weeks and months have shown that there is a tremendous focus on the automotive industry and it is now time to act based on the learnings,” says Opel Group CEO Dr. Karl-Thomas Neumann.

“It is obvious to me that the diesel discussion is a turning point. The world is not as it was before. We cannot ignore this and it is in the hands of the automotive industry to change the perception of the new reality.”

This procedure has broad industry acceptance and has been developed to be more representative of what customers will experience in use.

According to EU plans, the “New European Driving Cycle” (NEDC) will be replaced starting in 2017 with the more modern standard “Worldwide Harmonized Light Duty Vehicles Test Procedure” (WLTP). The WLTP – also a test conducted in laboratory conditions – is based on stringent test procedures, more consistent with fuel consumption and CO2 emissions in real-life road traffic. This new test cycle is important to maintain standardized, reproducible and comparable results.

Improvements to selective catalytic reduction technologies are also being developed.

"Our analyses in the last months show that we have no devices that tell us if our vehicles are in a test cycle or not. Nevertheless, we also believe that we are capable of further improving the effectiveness of reduction of oxides of nitrogen emissions from our Euro 6 diesels with SCR technology and so we are making an improvement towards future RDE specifications,” emphasizes Dr. Neumann.

“We will use SCR as the mainstream system for Euro 6 diesel going forward as we continue to develop improved technologies to explore higher efficiencies.”

The work on this Euro 6 SCR improvement has started and we expect a production implementation as of the summer of 2016. This activity will also include a voluntary customer satisfaction field action that will involve 43.000 vehicles that are already on the road in Europe (Zafira Tourer, Insignia and Cascada).These vehicles will get a new calibration once it becomes available.

Neumann also called for improving the transparency between automakers and authorities in Europe. “In the USA, the companies disclose their complete calibration philosophy to authorities. I would like to see us embrace this practice in Europe.” In this context, the Opel CEO also wants to suggest that all automakers that are active in Europe take part in a negotiated agreement for more transparency.