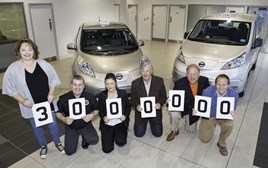 Nissan’s electric vehicles have now clocked up in excess of three million miles as taxis in the UK.

Six of the largest and longest-established Nissan taxi fleets the UK – Phoenix Taxis in Blyth, Northumberland, C&C Taxis in Cornwall, Premier Cabs in Blackpool, 203020 Electric in Dundee, eConnect Cars in London and eCorporate Travel in Edinburgh – have surpassed the three million miles between them.

With many smaller fleets and independent operators also operating across the country, the true figure is likely to be significantly higher.

Karl Anders, national EV manager at Nissan Motor (GB), said: “There can now be absolutely no doubt that the Nissan LEAF and e-NV200 make brilliant taxis.

“Operators across the UK have put them to the ultimate test – running them 24-7 and rapid charging them time and time again to keep them on the road and making money.

“As a result, we’ve seen more and more taxi operators seriously looking into electric vehicles as their existing diesel and petrol vehicles come up for replacement.

“This is a trend we expect to continue and accelerate as the charging infrastructure across the country continues to expand.”