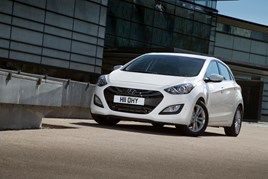 To help it achieve its target, Hyundai has carried out a senior management reorganisation which has seen Pigounakis become fleet director.

He was previously the company’s sales director and this position has been filled by Martin Wilson, who had been Hyundai’s fleet director since January 2013.

The fleet director had previously reported to the sales director but, under the reorganisation, both positions will now report directly to Tony Whitehorn, CEO of Hyundai UK.

“Like many manufacturers, we are looking to grow quite considerably,” said Pigounakis.

“Martin has done a fantastic job. We worked together to get the best possible results and that will carry on; he’s laid an incredibly strong foundation.”

Hyundai last year saw fleet sales rise 10.7% to 46,953  and Pigounakis said it is now looking at the channels it is selling into.

“There are some that we want to focus on more aggressively than others,” he added.

“Of the percentage of our mix of sales, I would say that our volume in fleet will remain largely static, therefore you won’t necessarily see double-digit growth again.

“If we can achieve double-digit growth this year in the channels we want to, then we will, but it’s about getting the right mix of business, which is more important than just trying to drive volume for the sake of volume.”

Pigounakis said one of the channels Hyundai will focus  on is Motability.

Last year its sales in this sector rose 26.5% to 13,756, while in September the manufacturer hired Val Geary as its rental and Motability manager.

“Motability is one of the very few channels in the market which is discreet and represents genuine volume opportunities,” said Pigounakis. “Also, it doesn’t damage the brand at all in any way shape or form.

“It is being exploited very effectively by some of our competitors and we want to have a serious look at how we want to increase our share of the market.”

Pigounakis said its ambitions in this area have been helped by the success of its Tucson SUV, launched in September last year. “It’s become our fastest-selling car,” he added. “It’s had a massive impact in Motability and there’s no reason why we shouldn’t be able to build on that.”

Pigounakis said another priority will be to continue to improve the manufacturer’s image.