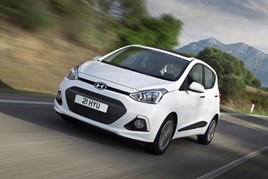 Hyundai's UK fleet growth has been recognised with the ‘Most Improved Fleet Manufacturer’ award at the Fleet News Awards 2016.

Hyundai’s significant fleet business growth, product innovations, process improvements, and its high level of customer service were identified as central to the win.

Last year, Hyundai grew total fleet sales by 10.7% against 2014 boosted by the introduction of several important new models. The Fleet News award recognised the rapid advances made by Hyundai Motor and its introduction of several key initiatives including a structured approach to managing residual values, while maintaining affordable whole-life costs.

Stephen Briers, Fleet News editor, said, “Hyundai’s recognition is the culmination of four-year’s constant improvement, and one which saw the company awarded highly- commended in this category for the past three years. Now it takes the win after identifying and realising new ways to improve its service, as well as its product range. From fleets to leasing companies to the pricing guides, Hyundai has engaged them all, resulting in consistent year-on-year increases in its true fleet registrations.”

Tony Whitehorn, president and CEO, Hyundai Motor UK, said, “For Hyundai Motor to be recognised as the ‘Most Improved’ by Fleet News is a fantastic achievement. The team has consistently worked hard to deliver the best product offering, together with a first-class after sales programme and class-leading financials.

“Having been runner-up in this category for the past few years, this win represents one of the biggest leaps we have made in achieving our goals – a fitting testament to the dedication and hard work of everyone within the fleet department.”

In 2015, the company also expanded its fleet team, developed its Fleet Sales Charter and introduced projects including Hyundai 360 Workshop Automation and a new driving school programme.

Alongside being named most improved fleet manufacturer, Hyundai was also presented with the 2016 ‘Best City Car’ award for the Hyundai i10.

“With a market-leading five-year warranty which is ideal for fleets on longer replacement cycles, the Hyundai i10 is a spacious, refined car with excellent build quality and strong residual values. The judges called it a stand out car in a highly competitive sector,” said Briers.