No replacement expected for Toyota Avensis

Was this article useful?
15 people found this useful 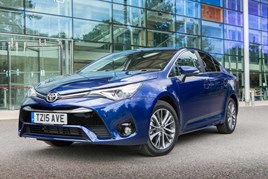 Toyota will not replace the Avensis at the end of the current model’s lifecycle, hoping customers will be tempted by its revamped line-up of hybrid models, Fleet News has learned.

The Avensis, introduced in 1997 and selling around 20,000 units a year in the UK in its prime, was given an extensive facelift in 2015 and diesel power from BMW.

However, although officials will only say a decision has not yet been made on its future, Fleet News understands that there will be no direct replacement for the D-sector car, in a strategy that has similarities with Nissan’s decision to kill off the Primera more than 10 years ago.

The Toyota C-HR crossover, unveiled in production form at Geneva this month, will give Toyota a rival for the Nissan Qashqai, while the larger Rav4 SUV has recently been revamped. Both offer petrol-electric hybrid options, with the Rav4 also available with a BMW-sourced 2.0-litre diesel engine.

Toyota has also pitched the hybrid-only Prius as an upper-medium sector car for the last two generations, and the latest version of the car, with CO2 emissions from 70g/km, is also likely to attract those who want to minimise BIK tax liability with low-emission motoring. The Avensis has never been offered with a hybrid powertrain.

Toyota’s current upper-medium model has been produced at its factory at Burnaston, in Derbyshire, since it replaced the Carina E in 1997. But as a car designed exclusively for Europe, and with production now around 33,000 units a year out of total production at Burnaston of around 170,000, it’s clear the model’s appeal is declining.

While some customers will prefer the conventional saloon body style of the Avensis, and with no alternative saloon in the range, Toyota is thought to be considering offering a Corolla saloon.

According to Martin Ward, manufacturer relationship manager at CAP HPI, manufacturers other than Ford, Vauxhall and Volkswagen have found it increasingly difficult to make an impression in the mainstream upper-medium sector.

He said: “The Prius and Auris hybrids are becoming more popular and Toyota seems to have found a good used car base for them with strong interest from minicab businesses.

“The Avensis has never been available as a hybrid, and has always been a middle ground player in the sector. It’s been good but struggled against the bigger players.

“People that used to buy D-sector cars have looked elsewhere at premium badge models, people carriers and crossovers, so in that sense, the new C-HR is coming at the right time for Toyota.”