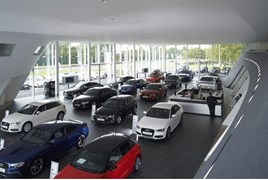 The data was drawn from Touchpoint, Experteye’s driver satisfaction survey which requests driver feedback after key events such as vehicle delivery, servicing, tyre replacement, windscreen and glass repair and replacement, vehicle breakdown, use of pool vehicles and when a driver suffers an accident.

The driver data is not only important to motor manufacturers and dealerships, it also acts as an important tool for contract hire and fleet management providers to measure and manage their service levels, and that of their supplier network.

The Experteye awards cover nine different fleet and automotive award categories in total. Jardine Motors Group won its accolade based on feedback drawn from 40,000 drivers of leased vehicles during 2015, making this a truly objective reflection of driver attitude.

“All results are based on independent feedback we receive from company car drivers, making the company deserved winners of the best fleet dealer group for aftersales for 2016.”

Andy Wady, group fleet director at Jardine Motors Group, said: “Winning this accolade means a lot to the Group and is testament to our Aftersales team’s hard work and dedication to deliver exceptional customer service.

“As a group we are a large and long term supplier of new cars to the corporate marketplace and this is a key growth area for us. However, we have also been focussed on growing our fleet aftersales business and over the last couple of years we have introduced a number of initiatives under the ‘Jardine Difference’ to make us easier to deal with and to improve the level of customer service we provide both to the fleet operators such as our key leasing partners but also to the end user driver.

“We are therefore delighted that this award recognises the progress we have made and as it is based on individual driver’s feedback, provides a really robust measure of the group’s overall performance across all of our sites.”

Jardine Motors Group’s Group Fleet department will supply over 13,000 vehicles this year from a range of 23 manufacturers to a wide range of corporate customers covering large end users, leasing companies and SME’s.  Cars are delivered nationwide from eight dedicated fleet hubs and vehicles are serviced at any one of the company’s 70 dealership locations.