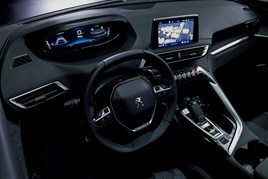 Peugeot has presented its latest vision for production car interiors with a new i-Cockpit concept, offering configurable instruments, a dashboard touchscreen and fewer switches than before.

The i-Cockpit is being presented as an interior concept, and a development of the interiors of the 208, 2008 and 308, but it is expected to appear as shown in the second-generation 3008 due later this year.

Peugeot wants drivers to have access to as much important information as possible with the minimum distraction from the road ahead, while reducing ‘clutter’ on dashboards by cutting back on the number of switches needed.

The latest i-Cockpit concept does away with analogue dials on all equipment grades, with what it describes as a ‘head up’ instrument display on a 12.3-inch high-resolution screen. It is completely configurable, with displays designed in-house, and contains animations for transitions between different views.

Working on a similar principle to the Audi ‘virtual cockpit’ fist seen in the TT in 2015, and available in the latest R8 and A4, Peugeot is intent on bringing this technology into the mainstream.

But the positioning of the screen in Peugeot models at a higher level, enabled by Peugeot’s now trademark elliptical compact steering wheel, offers an unobstructed view of the information screen above.

The compact steering wheel, which is smaller in this latest concept than in the 208, 2008 and 308, helps the car feel more responsive and engaging.

It’s accompanied by an eight-inch dashboard-mounted touch-screen that will house audio, ventilation, connectivity and navigation functions.

Below it on the dashboard centre is a row of seven metallic-finished switches for windscreen demisting, hazard warning lights, audio short-cut, heated seats (where specified) and other main features.

Peugeot says since 2012 more than two million customers have chosen cars based around the i-Cockpit, and has become part of the character of modern Peugeots.

The interior is compatible with 3D navigation, connected to voice recognition, with real-time traffic information from TomTom Traffic, and the possibility of viewing navigation and direction indications directly on the head-up screen.

It can also be linked to hands-free devices with voice commands, automatic management of text messages (reading, sending), information on a various driving aids, as well as connectivity with the Mirror Screen function and compatibility with Apple CarPlay, Mirrorlink and Android Auto systems.

Peugeot claims the combination of the displays, adjustable lighting and acoustic functions, as well as giving the customer choice of subtle fragrances that permeate the interior through the ventilation system, and the option of massaging seats, will offer a unique experience among mainstream cars.

A Peugeot spokesman said: “The new Peugeot i-Cockpit goes further in all fields. More quality in its presentation, more technology in its design, better connected, more intuitive, and taking excitement and personalisation even further: it is the embodiment of what future driving cabins will be, and the materialisation of tomorrow’s Peugeot interior. “