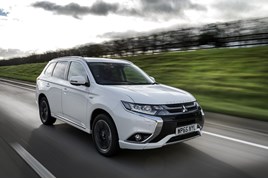 Nissan is to take a 34% stake in Mitsubishi Motor Company (MMC).

MMC’s share price fell by 45% over the last month after the company announced that fuel economy figures for models in Japan had been inflated, with around 625,000 cars believed to be affected.

No announcement has been made about other markets, but investigation in the US is expected to be launched soon.

The two Japanese automakers announced that they have signed a basic agreement, yesterday (May 12), to form a far-reaching strategic alliance - extending on an existing collaboration between them.

Carlos Ghosn, chief executive and president of Nissan, said: “This is a breakthrough transaction and a win-win for both Nissan and MMC. It creates a dynamic new force in the automotive industry that will cooperate intensively, and generate sizeable synergies.

“We will be the largest shareholder of MMC, respecting their brand, their history and boosting their growth prospects. We will support MMC as they address their challenges and welcome them as the newest member of our enlarged Alliance family.”

Osamu Masuko, chairman of the board and chief executive of MMC, said: “This agreement will create long term value, achieved through a deepening our strategic partnership including sharing resources such as development, as well as joint procurement.”

Under the terms of the transaction, Nissan will purchase 506.6 million newly-issued MMC shares at a price of £2.99 per share. The price per share reflects the volume weighted average price over the period between April 21 2016 and May 11 2016. Nissan will become the largest shareholder of MMC on closing.

MMC and Nissan expect Mitsubishi Heavy Industries, Mitsubishi Corporation and The Bank of Tokyo – Mitsubishi UFJ to maintain a significant collective ownership stake in MMC, and to support the strategic alliance.

On closing, MMC will propose Nissan nominees as board directors in proportion to Nissan’s voting rights, including a Nissan nominee to become Chairman of the Board.