New Ateca delivers best ever residual values for a Seat 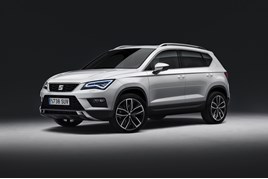 The new Ateca SUV has delivered the best ever residual value forecast for a Seat already – up to 59% after three years/60,000 miles.

Cap HPI has announced that the Ateca will retain on average up to 52.6% of its value across the range after three years or 60,000 miles.

Underlining the Ateca’s low running cost credentials is its now confirmed emissions and fuel consumption figures; the first ever crossover vehicle from Seat can deliver up to 65.7 miles per gallon on the combined cycle in 1.6 TDI 115 PS manual form while emitting 113g/km of CO2.

The entry-level petrol engine is a naturally aspirated 1.0-litre three-cylinder TSI unit, which also produces 115 PS, offering a combined fuel economy of 54.3 mpg and emissions of 119g/km of CO2 in ‘S’ trim.

Cap HPI’s analysis sees Seat’s first ever SUV deliver residual values that are either best or near best-in-class depending on trim level – S, SE, Xcellence and a ‘First Edition’– and engine choice, with the 1.0 TSI S petrol five-door achieving a predicted RV of 59% after three years/60,000 miles. The range average is an extremely reassuring 52.6 per cent.

Seat UK head of fleet and business sales, Peter McDonald, said: “The total cost of ownership is a vital consideration of today’s fleet purchasing process, and it’s a statement of intent to announce best-in-class residual values for a number configurations of the new Ateca.

“Developing the best designs and driving experiences is at the heart of the Ateca, but we have kept true to our core Seat values to ensure it is also cost-effective and affordable as an SUV to all fleet managers and user choosers.

“However, that has not come at the expense of style or technology, as the Ateca boasts a high level of innovative equipment to help fleets run efficiently and safely.”