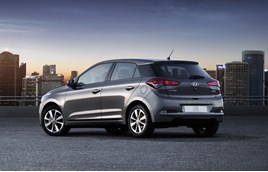 Hyundai has revealed pricing and specification details for its new i20 Turbo Edition which goes on sale in August.

The new model is designed, engineered and built in Europe with prices starting from £12,975.

Based on the i20 SE, the Turbo Edition offers Bluetooth, DAB, cruise control with speed limiter and a leather wrapped steering wheel as standard.

To coincide with the launch of the Turbo Edition, Hyundai will be launching a new television advertisement for the i20 which will run from August 5 – September 19.