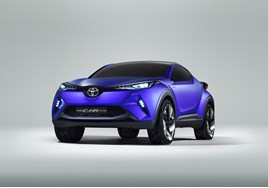 The manufacturer will be exhibiting the Toyota C-HR hybrid, the new generation Toyota Prius plug-in hybrid and the Lexus LC 500h coupe at the event.

“That is a new record for us and positions Toyota and Lexus as leaders in electrification.”

The company plans to achieve more than 900,000 total sales in Greater Europe this year, with a third of those being hybrid.

Toyota’s target is to reach 50% of its European sales with hybrid vehicles by 2020, with a hybrid version in every major market segment.