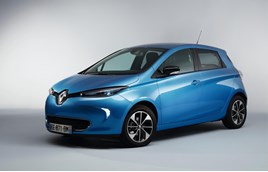 By increasing the range and reducing the price of its EV line-up over the next four years, the company is hoping to attract a high number of urban drivers who cover lower mileages.

Eric Feunteun, Renault global EV programme director, told Fleet News: “At this stage the priority is not the customer that drives 600 miles per week; 75% of Europeans drive less than 31 miles per day, so let us focus on those first.”

A family-sized car capable of covering 500 miles on a single charge is at least five years away, according to Feunteun. Although the battery technology is available, it is currently too expensive for the market.

He said: “Longer range is a bigger challenge and Renault is about affordable technology – therefore we have to find the right balance between the size of battery and the price.”

He added: “EV growth will occur in two stages and the first is incentive.”

Once demand increases the industry will benefit from economies of scale, whereby the cost of the technology will fall – making longer range EVs more affordable for the average buyer and fleets.

“When we talk about incentive, we have to separate the money and the physical incentive – which are both very important,” he explained.

“Financially we are still seeing growth . The UK is the only example which has cut them back. Most countries offer around £5,200. I think this is the right level to offset the cost gap and make sure that we are at the same price point as a non-EV.”

But it’s the non-financial incentive that is critical, according to Feunteun.

He said: “In everyday life the question should be is your life easier or not when you drive an EV. That’s key for the customer – and it’s much easier for governments because it’s usually free or very cheap.”

He wants legislation to be introduced which offers EVs access to bus lanes, free access to city centres (low emission or congestion zones), free parking in cities or airports and better spaces in shopping centres.

“All these small benefits will make customers think their EV does make life easier, beyond the question of ‘green’ or if it’s a pleasure to drive. This is very important and needs to increase very much,” Feunteun said.

To date, EV sales are significantly less than first anticipated for Renault. In 2010 the Renault-Nissan alliance set a target of selling 1.5 million EVs by the end of 2016, but, despite being the market leader, it has managed just 350,000.

The company revealed an updated battery for its Zoe city car at the Paris motor show, which boosts range to 250 miles. It goes on sale next month and the battery is no bigger than the existing unit, but has double the capacity.

Prices are yet to be released in the UK but in France the car will demand a £3,000 premium – the current Zoe costs from £17,795 including the Government’s plug-in car grant.

Feunteun said: “This is an important breakthrough; the research we have carried out with our customers and by looking at what our competitors can offer showed that the 190-mile range barrier is a significant threshold for buyers.”

Feunteun would not say if there were plans to fit the battery to other models in the alliance, such as the Nissan Leaf, but he did confirm that the entire line-up of EVs at Renault-Nissan will be subjected to a number of upgrades over the next four years.

Renault wasn’t the only manufacturer at the Paris show to indicate its EV intentions for the future, though. The Volkswagen Group outlined its strategy to offer a range of 30 EV models by 2025 including a city car with a 350-mile range.