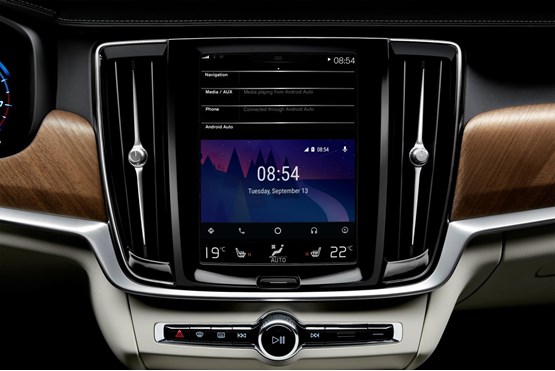 Volvo Car has improved its in-car connectivity with the introduction of Android Auto smartphone integration to its 90 series models.

Android Auto, which is now available as part of a new Smartphone Integration package that also includes Apple CarPlay, allows users of Android smartphones to connect their device directly to their Volvo’s Sensus media system.

A wide range of Android-optimised apps – including Google Maps and Google Play Music – are then available directly via the car’s touch screen. Users can also make and receive calls, and send and receive text messages using Android Auto. Alternatively, these functions can be controlled using the car’s or the phone’s sophisticated voice control system, so users can stay connected while keeping their eyes safely on the road at all times.

Thanks to the touch screen’s large size and portrait layout, the Android Auto apps are displayed in the bottom section of the screen, leaving the top of the screen free to display the car’s other main functions, further enhancing the system’s ease of use.

Jon Wakefield, managing director of Volvo Car UK, said: “It’s more important than ever for our customers to stay connected while on the move. Our Apple CarPlay integration was already the best in the business, and the introduction of Android Auto brings our class-leading smartphone integration to a whole new audience.”

Smartphone Integration includes a second USB socket and is available now on the S90, V90, V90 Cross Country and XC90, priced at £300. Existing owners of these models (those built after April 2016) who already have Apple CarPlay can benefit from a complimentary upgrade to Smartphone Integration as part of their car’s routine servicing schedule at an authorised Volvo dealership.

Android Auto is available on any Android smartphone running 5.0 (Lollipop) or higher.