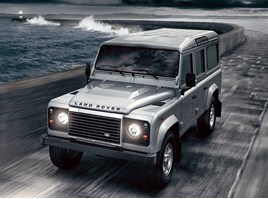 The Land Rover Defender has entered the Top 10 Most Stolen and Recovered league table for the first time, according to the latest figures from Tracker.

The study reveals a 57% increase in the number of Land Rover Defender thefts from 2015 to 2016, confirming a rise in demand since its production stopped in January of last year.

Andy Barrs, head of Police liaison at Tracker, said: “The fact that we have seen the number of Defender thefts double this year compared to 2015 shows just how popular these cars have become, particularly since they are no longer in production, making them a major target for organised car thieves.

“Additionally, Land Rover Defenders are popular second cars meaning they are often parked on driveways or stored in garages most of the time, making them sitting targets for thieves.”

Police in Essex recently assisted Tracker in the successful recovery of a stolen Land Rover Defender in just four hours after it was taken from the owner’s driveway. A tracking device meant police were able to locate the vehicle very quickly.

The first Electric Defender has started work at the Eden Project near St Austell in Cornwall in an inaugural real world trial of its capabilities. Unveiled at this year's Geneva Motor Show, the Land Rover Electric Defender is a pioneering research project into the electrification of an all-terrain vehicle.

New statistics from insurer NFU Mutual reveal that thefts of Land Rover Defenders have increased by a staggering 75%.

The BMW X5 has reclaimed its place as the 'most stolen and recovered' vehicle in 2016, according to figures from Tracker.