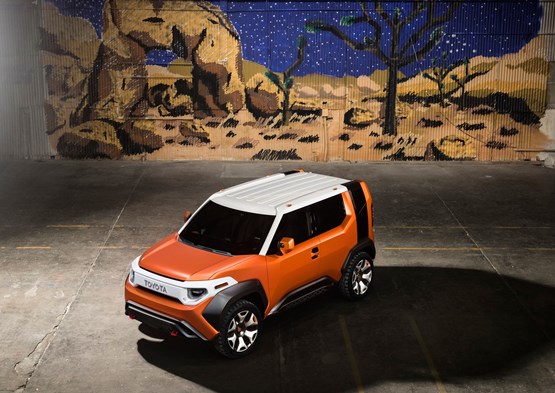 Toyota has revealed the FT-4X concept, a four-wheel drive crossover designed for the millennial generation.

The concept car made its debut at the New York International Auto Show, last week.

Dubbed a four-wheel drive “toolbox,” it has been penned by Toyota’s Calty design centre in California.

Kevin Hunter, Calty president, said “The Toyota FT-4X is not simply a concept where style meets function; it is a thoughtful, charming and engaging experience that adds real pleasure and convenience to the journey. We focused on how a crossover vehicle can add fun and value to casual adventures both in and out of the city.”

Its styling has been defined as “Rugged Charm” by Toyota, while its capabilities are “casualcore” rather than hardcore, supposedly making the FT-4X suitable for any kind of outing, any time.

For the exterior, the stylists applied an “X” theme throughout the car’s Toyota New Global Architecture C-platform: for example, a door handle is located at the centre of a vertical, bowed X, at the widest point of the vehicle. This places driver and passenger within the broadest area, creating a natural protective zone. A similar bowed X shape can be seen in the rear hatch design, again with the door handle centrally located.

The designers took an unconventional approach to their work, starting with the rear of the vehicle rather than its nose or profile. This acknowledged how the target Gen Y explorers make the tailgate or hatch of the car the centre of activity.

Generous approach and departure angles ensure that FT-4X can tackle both on and off-road conditions – capability that is reflected in the black-painted wheel arch mouldings. A vertical window above the offside rear wing pays homage to the design of Toyota’s Xtracab pick-up and original 4Runner SUV, with removable glass that can be replaced with tinted or opaque options.

Sculpted rocker panels enhance underbody protection and durability when venturing off the beaten path. And whenever the FT-4X does find some heroic scenery, a GoPro HERO5 Session camera built into the driver’s side rear-view mirror can capture it all.

Inside the cabin has been conceived as a large open space fitted with easily accessible storage for all kinds of kit. Areas are colour-coded: blue for closed and orange for open storage. The inside of the hatch features two boxes, one warm, one cold, to warm or cool items as required.

The FT-4X has been designed potentially to run with a small-capacity four-cylinder engine. It features mechanical four-wheel drive and selectable low-range transmission, reinforcing its always-ready character. The sophisticated MacPherson strut front and double wishbone rear suspension design is engineered to cope with driving over rocks and potholes.