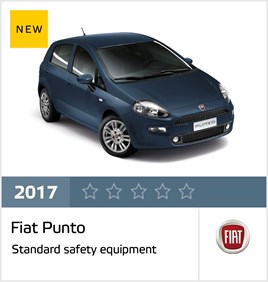 The final test results of 2017 have highlighted the importance of carmakers fitting potentially life-saving technologies to new models, such as Autonomous Emergency Braking.

To allow consumers to make a fair comparison of new models, Euro NCAP has updated the ratings on several of recently facelifted cars.

The Toyota Yaris managed to keep its five-star rating, but most of these cars have dropped to three stars in this year’s safety tests.

Matthew Avery, director of research, Thatcham Research, said: “In 2005 the Fiat Punto achieved a good rating. However, Euro NCAP frequently raises the bar in its testing regime – and the Punto’s adult occupant protection score of 51% is more than 30% below the average for the Superminis tested in 2017.

“The results for Ford’s C-Max cars disappoint. There is a distinct lack of safety technology to help avoid collisions, and below average adult and child occupant scores in the event of a collision.”

The zero-star Euro NCAP rating for the FIAT Punto, a re-release of the 2005 version, came because of low scores for its crash performance, combined with the absence of key technologies such as Autonomous Emergency Braking (AEB) and Lane Support Systems - giving it an unprecedented 0% ‘Safety Assist’ result.

“Some great strides have been made in car safety this year. 72% of the cars tested achieved a five-star Euro NCAP rating, versus 56% in 2016.

“From the beginning of 2018 vehicles without standard-fit AEB systems won’t be able to achieve a five-star Euro NCAP rating,” added Avery.

Thatcham Research says the Ford Mustang bucks the positive trend towards safer cars by not offering similar levels of safety in the UK as in the United States.

Euro NCAP aims to hold manufacturers accountable for autonomous car safety with the launch of its Road Map 2025.