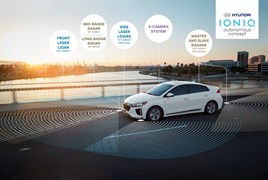 Hyundai plans to bring a level four autonomous car to market by 2021, following the announcement of a new partnership with technology specialist Aurora.

The two companies will begin testing next year using a modified version of Hyundai’s new fuel-cell vehicle, which will debut at the 2018 Consumer Electronics Show (CES), in Las Vegas.

To start, the partnership will focus on the ongoing development of hardware and software for automated and autonomous driving and the back-end data services required for Level 4 automation.

Level 4 autonomous vehicles can operate without human input or oversight under select conditions.

“We know the future of transportation is autonomous, and autonomous driving technology needs to be proven in the real-world to accelerate deployment in a safe and scalable manner,” said Dr. Woong Chul Yang, vice chairman of Hyundai Motor.

“Combining our advanced vehicle technology that embeds the latest safety features with Aurora’s leading suite of Level 4 autonomous technology will advance this revolution in mobility with Hyundai in a leadership position.”

Hyundai’s partnership with Aurora is part of the company’s ongoing efforts towards realising fully autonomous driving. Hyundai first began testing autonomous vehicles on public roads of the USA in 2015, having been granted a license by the state of Nevada. Last year at the 2017 CES, Hyundai advanced its trials in urban environments, demonstrating self-driving technologies to the public with its autonomous Ioniq models.

Hyundai is bringing alternative fuels into the mainstream in an innovative way with the Ioniq three-in-one car. It is committed to hydrogen as well as electrified platforms and its sustainable energy is evident in its Korean factory where surplus electricity produced by solar panels is fed back into the grid.

Hyundai has unveiled its next generation fuel cell vehicle, well ahead of the hydrogen-powered SUV’s official launch early next year.

Stewart will lead the Hyundai UK fleet department and is tasked with further growing the brand’s influence in the business and company car market.