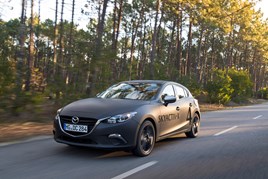 Mazda has invented a new type of petrol engine which, it believes, will offer fleets a better alternative to electric in the mid-term.

It will go on sale in 2019 in the all-new Mazda 3, before being made available across the rest of the carmaker’s line-up.

The fuel savings are expected to be at least 20% greater than the brand’s current Skyactiv-G petrol engine and more than 30% in certain conditions.

As the engine is still at prototype stage there are no official figures for CO2 emissions, but Mazda’s powertrain manager Keiko Strietzel said the carmaker is expecting a reduction of 30% compared with the existing unit.

The new engine uses compression ignition to achieve the efficiency savings, technology which has only ever been used on diesel vehicles in the past. It allows for a much lower quantity of fuel to be used when compared to a traditional spark plug ignition engine.

Getting compression ignition to work on a petrol isn’t particularly straightforward and Mazda’s engineers realised that they would need to retain the spark plug – unlike a diesel – to fully control combustion.

As a result the Skyactiv-X, with its aptly named Spark-Controlled Compression Ignition (SPCCI) uses a new engine management system to constantly monitor and adjust its operation.

We sampled the new unit in a prototype of the next-generation Mazda 3 – which wore the body panels of the existing model – and found it offered a better driving experience compared with a regular petrol car.

It generates strong torque at lower revs like a diesel motor and offers better refinement than a regular petrol at higher revs.

Mazda has attached a supercharger to the engine to give greater control over airflow and final production versions will feature mild-hybrid technology to further enhance efficiency.

The new Mazda 3 is expected to be revealed later this year, with styling similar to the Mazda Kai concept shown at the Geneva motor show.

Skyactiv-X is part of the brand’s ‘Sustainable Zoom-Zoom’ strategy to reduce well-to-wheel emissions by 50% before 2030.

Jeffrey Guyton, president of Mazda Europe, said: “The purpose of making cars is to have people enjoy their lives.

“We also see that they need to exist in a sustainable way with the world. What we are doing now, we believe, is trying to find the right solution to be able to do that.

“What we are interested in is an authentic well-to-wheel view: What are the real-word results of our cars and how do they compare to other solutions that we could offer like electric and plug-in hybrid?

“The international energy agency says most vehicles will still have a combustion engine as the on-board power supply for at least the next decade. It is essential that we create more efficient ones.”

By 2035 Mazda expects most of its models will feature some form of electrification. In 2019 it will launch its first fully-electric car and in 2021 it plans to bring plug-in hybrid technology to its range.

However, the brand isn’t giving up on diesel. A new Skyactiv-D unit will be released in 2020.

“If we focus a lot of effort now on finding efficiency for internal combustion engines, by the time we need electric devices to comply with regulation they will be much better than they are today,” Guyton said.

He believes electric vehicles are only appropriate to bring into regions that have a sustainable electricity supply, if emissions reduction is the target.

“When there is a breakthrough in battery design and sustainable electricity production, then electric vehicles will make sense,” he added.

The average C-segment electric car needs around 23kWh of energy to cover 62 miles.

According to Guyton if that energy is produced by carbon means (such as coal) it emits the equivalent of around 200g/km.

Electricity produced with natural gas would be equivalent to around 100g/km.

He said: “We think that Skyactiv-X can match what is the near-term future for the electric grid and be competitive on a well-to-wheel aspect.”