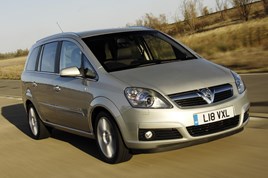 A joint investigation between the Driver and Vehicle Standards Agency (DVSA) and Luton Borough Council trading standards has been launched into a series of fires involving the Vauxhall Zafira.

The criminal investigation follows a report by the Transport Committee last year, which said that the decision to continue to let people drive affected cars, once it knew that vehicles already recalled still caught fire, amounted to a “reckless disregard for safety”.

In a statement, the DVSA told Fleet News: "DVSA's priority is to protect you from unsafe drivers and vehicles.

"We have made it clear to manufacturers that to protect consumers, they should swiftly rectify problems and meet their obligations under the code of practice.

"DVSA will take the necessary action against any manufacturers who fail to comply with their obligations."

Vauxhall - which has its headquarters in Luton - is complying with the investigation and says 92% of the affected models have been recalled.

The first reported incident of a Zafira catching fire was noted by Vauxhall in 2009, but it took until August 2015 for the carmaker to launch an investigation, after recording 161 reports of fires.

The carmaker said the fires were caused by "unauthorised repair" of the thermal fuse in the vehicle's blower resistor.

In a statement issued by the manufacturer after the Transport Committee report, Vauxhall said it acknowledged it had learned lessons from the cases of fire in Zafira B models.

It continued: "We have made improvements to the way we investigate cases of vehicle fire and strengthened our recall process to ensure vehicle safety and to minimise customer inconvenience.

"While we recognise that undertaking two recalls was inconvenient for Zafira B customers, we maintain that the first recall was necessary based on our investigations and we were compelled to act with urgency based on the information available, notwithstanding the fact that further investigations were ongoing. As soon as we had identified the issue, we made it clear to customers in the recall letters how they should operate the heating and ventilation system to keep them safe."

Vauxhall is to begin a second recall programme for its Zafira B model following a series of fires.

Vauxhall was too slow to begin a full investigation into fires affecting Zafira B models, a critical report claims.

Practices and procedures at the Driver and Vehicle Standards Agency have undergone significant reform following a distinctive pattern of Vauxhall Zafira fires in 2015.