The decline in diesel new car registrations continued in June, with the Society of Motor Manufacturers and Traders (SMMT) reporting a 28.2% fall compared to June 2017.

Overall, year-on-year demand fell by 3.5%. Demand from larger fleets fell by 6.4%, but business buyers with fewer than 25 vehicles on their books returned to showrooms, registering an 11.3% uplift in demand after an 11-month long hiatus. Private demand was largely flat, down by 0.6%.

Smaller cars remained most popular, with Supermini and Lower Medium vehicles taking a combined 57.4% market share. However, Dual Purpose was the fastest growing segment, with demand up by some 16.4% - 6,710 more than in the same month last year. Dual Purpose, Executive (+4.3%) and Luxury Saloon (+1.3%) were the only segments to register growth in June.

There was good news for the alternatively fuelled vehicle sector, with a 45.0% increase in plug-in and hybrid registrations as consumers responded to a growing range of models.

“Given these cars still represent only one in 20 registrations, however, they cannot yet have the impact in driving down overall emissions that conventional vehicles, including diesels, continue to deliver.

“Recent Government statements acknowledging the importance of petrol and diesel are encouraging. However, we now need a strategy that supports industry investment into next generation technologies and puts motorists back in the driving seat, encouraged to buy the car that best suits their needs – whatever its fuel type.”

June capped off a turbulent first half of the year, distorted by the previous year’s VED hikes, with the market experiencing a severe double-digit decline in March followed by a stronger April and May, when year on year demand grew. Year-to-date, overall demand remains down, by some 6.3% to 1,313,994 units.

“Although there was only a slight drop in new car sales with a year-on-year drop of 3.5%, the Government must provide greater reassurance so motorists and businesses have the confidence to invest in vehicles that suit their day-to-day needs.

“There has been substantial growth in the uptake of plug-in and hybrid vehicles, with 45% more sold during this June than in June 2017.

“Consumer awareness and confidence in AFVs is growing rapidly and our own research has found that 42% of fleets plan to add more AFVs within the next two years. But there needs to be more investment and support in infrastructure for AFVs if we’re to support people and companies on their journey to zero emissions.”

Ashley Barnett, head of consultancy at Lex Autolease, continued: “June is traditionally stronger than May for new car registrations, but consumers and businesses are still hesitant when it comes to replacing their cars.

“Drivers need answers to make informed purchase decisions. Many are waiting until after the application of Worldwide Harmonised Light Vehicle Test Procedure (WLTP) in September and the potential announcements to come with the Budget in November.

“Business customers are requesting extensions to their contracts and freezing their vehicle policies – behaviour that’s being replicated in the personal leasing market.

“We do expect registrations to pick up, after the uncertainty around the long-term tax implications of different car choices is resolved, and we expect the trend towards alternative fuels to gather pace.

“To support the Government’s zero emissions agenda, we’re encouraging customers to consider the advantages of electric over hybrid.  For those who drive less than 10,000 miles a year, there is the potential for electric to play a big part and deliver significant whole-life cost savings.” 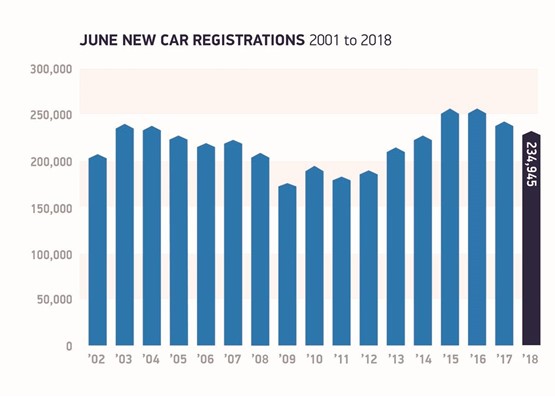 Diesel will remain a key fleet fuel and an “indispensable” part of the air quality solution, Volkswagen told listeners to ACFO’s third webinar.

The SMMT today called for swifter progress on Brexit and a deal that, as a minimum, maintains customs union membership and delivers single market benefits.

Figures from the RAC show fleet decision-makers had some respite at the pumps in June, with the average price of diesel and petrol falling.