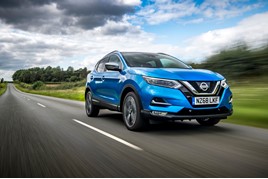 Nissan has redesigned the 1.5-litre DCI diesel engine in the Qashqai, providing more power and CO2 emissions of 100g/km.

The fleet favourite offered CO2 of 99g/km under the old NEDC test.

Now developing 115PS the unit offers drivers a 5PS increase in power over the 110PS of the previous generation. Torque remains the same at 260Nm, though the engine now features an all-new overboost function. This delivers an extra 5PS and25 Nm of torque for up to 15 seconds of driving.

Nissan says more than 90% of the engine’s components have been modified to deliver these improvements, including the oil cooler module, oil filter, dual mass flywheel, vacuum pump and high-pressure fuel pump.

Jean-Philippe Roux, general manager, crossovers, Nissan Europe, commented: “The upgrades to the 1.5-litre engine in the Nissan Qashqai further enhance its performance on the road and its appeal to consumers.”

The Qashqai is the most successful model in Europe in Nissan’s 83-year history, with approximately 2.3 million sold since the original version was launched in 2007.