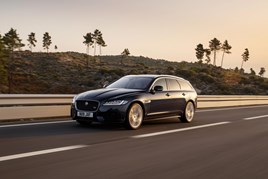 Jaguar Land Rover (JLR) has maintained its sales volume in September in the face of a market slump of 20% after taking action to revitalise its two saloon models, the XE and XF.

Rawdon Glover, appointed UK managing director five months ago, recognised that the companies SUVs were dominating parts of the market but that sales of the XE and XF were “poor and declining”.

Speaking to Fleet News at the 2018 Paris Motor Show, he said: “We felt there was a significant opportunity to increase our share, especially with the WLTP uncertainty in retail. We set out some competitive offers, engaged the retailer network, increased demonstrators and we have been thrilled with the numbers in September.”

Quoting figures from the Society of Motor Manufacturers and Traders (SMMT), Glover said XE was number three in its sector with a 17% share in September, double where it was a few months ago, while XF Sportbrake was number two with a 24% share and the saloon had an 11% share, also double its previous performance.

“Pricing, dealer incentives and getting people to drive the car made the different,” Glover added. “We also have a very good order bank.”

His next challenge is to transfer this excitement to the fleet sector. “We will dissect and understand the best parts to go after and then we will go in with a clear proposition,” he said.

“This year, is price-related. For 20 model year, we will have specifications that people can see and feel, such as interior trim, size of the wheels, sporty body shape and a new front end. We will go back to why people buy a Jaguar: great looks and it drives well.”