New car registrations to fleet and business are down 7.7% year-on-year, according to new figures from the Society of Motor Manufacturers and Traders (SMMT).

Meanwhile, SMMT says that continuing uncertainty over Government policy on diesel saw demand fall by a further 21.3%. Registrations of petrol cars rose 7.1%, while the market for alternative fuelled vehicles (AFVs) once again showed strong growth, up 30.7%, supported by new models.

Hybrid and plug-in hybrid vehicles, which make up the majority of AFV sales due to their greater flexibility, also enjoyed strong uplifts, growing 31% and 19.1% respectively.

However, this is not surprising given the announcement that the plug-in car grant was to be cut for pure electric cars and withdrawn completely for plug-in hybrids – although, due to lead times, the full impact may not be seen for several months.

The figures come as SMMT publishes new industry forecasts for AFV demand, with registrations expected to grow 82.5% from 2017 levels by 2020. Similar growth (88.3%) is projected for plug-in electric cars, with 92,620 new plug-in hybrid and battery electric cars expected to be sold in the same year – taking market share to around 4.0%. This is at the lower end of government’s 3-7% stated ambition, with cuts to the Grant further undermining industry’s ability to deliver this ambition.

Mike Hawes, SMMT chief executive, said: “VED upheaval, regulatory changes and confusion over diesel have all made their mark on the market this year so it’s good to see plug-in registrations buck the trend. Demand is still far from the levels needed to offset losses elsewhere, however, and is making government’s decision to remove purchase incentives even more baffling.

“We’ve always said that world-class ambitions require world-class incentives and, even before the cuts to the grant, those ambitions were challenging.

“We need policies that encourage rather than confuse. Government’s forthcoming review of WLTP’s impact on taxation must ensure that buyers of the latest, cleanest cars are not unfairly penalised else we will see older, more polluting cars remain on the road for longer.”

In the year to date, the overall new car sector remains down 7.2% on the same period last year, albeit with more than two million new cars registered in the first 10 months of 2018.

Pending no further market disruption, some pull-back is hoped for during the remainder of the year as current supply issues ease, enabling manufacturers to cater for pent up demand on certain models, says SMMT.

Justin Benson, head of automotive at KPMG UK, said: “The UK’s automotive sector is in a transition phase. We are seeing a rebalancing of consumer demand, as new regulations and the perception of diesel are driving different consumer behaviours, with some moving away from diesel vehicles.

“However, those looking to change their vehicle may not want to rule out new diesel models, some of which are producing fewer toxic emissions than their petrol counterparts. These vehicles will be a viable choice for consumers for some time, particularly as the deals on offer continue to be attractive.”

Ashley Barnett, head of consultancy at Lex Autolease, added: “October’s decline is not unexpected. As it stands, company car drivers who renew now are doing so without knowing the tax consequence beyond 2021.  It is positive that more clarity will come in spring, but the uncertainty in the interim will make it difficult for drivers and fleet decision makers to commit to fleet replacements.

“We recommend that fleet operators consider extending existing agreements until the outcome of the WLTP consultation is known, or consider electing for an interim three-year replacement cycle. This would give them a clearer insight into the tax regulations beyond 2021 and most likely a better view of the additional zero-emission technology that will be available the next time they renew.  There may be an extra cost in the short term, but these measures would leave their fleet better placed to adopt newer, cleaner technology in 2021.

“Alternatively, employees may decide that company cars are unattractive in light of this tax uncertainty, the unintended consequence being that many may be pushed towards a less-regulated grey fleet environment.  In this scenario, higher emissions and safety issues create new challenges, and progress against the government’s Road to Zero strategy is slowed.

“With emissions targets in mind, it’s disappointing to have seen a month-on-month decline in plug-in vehicle registrations, especially following the news that the new, lower rate for the Plug-in Car Grant has been brought forward – which is likely to impact this market further.”

Jon Lawes, managing director of Hitachi Capital Vehicle Solutions, believes that a 30.7% year-on-year rise in motorists buying hybrid or electric cars is a rare bright spot in an otherwise disappointing couple of months for the UK new car market.

He said: “This demand for AFVs ties in with the trends we’re seeing in our own research, which shows that 82% of fleet managers believe it’s important to move towards AFVs and 42% of fleets are planning to add more AFVs within the next two years.

“The big question now is whether this enthusiasm will be sustained following the recent announcement of the removal of subsidies for hybrid cars which, as the SMMT rightly highlights, could undermine efforts to lower emissions.” 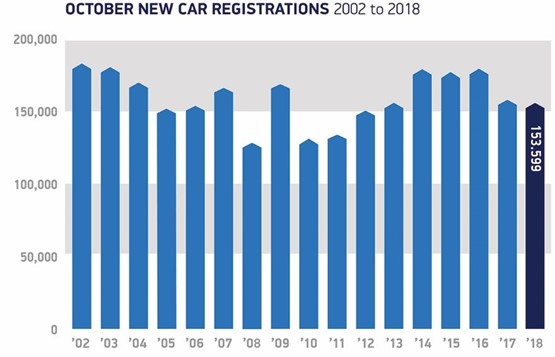 An influential Commons select committee has called on the Government to bring in a clear target for sales of new cars and vans to be zero emission by 2032.

Banning diesel too soon will slow ability to develop replacements

Banning diesel could help cities achieve air quality compliance in the shortest time, but punishing the fuel too quickly could halt the development of alternatives.

Most new diesels are already achieving the more stringent RDE-2 emissions standards, which don’t come into effect until January 2020.