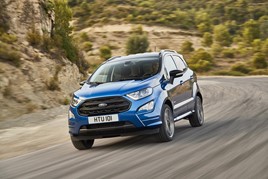 The fastest selling used car in the UK last month was the Ford EcoSport.

The second fastest selling car was the Ford Kuga.

The market intelligence comes from Indicata, the real time used vehicle management portal from Autorola UK which recorded the fastest-selling used cars out of 88,039 sold by dealers during November between six and 36 months’ old.

Unsurprisingly, Ford was November’s most popular used car brand with three models in the top 10 – the EcoSport, the Kuga and the Fiesta.

Kia, Mercedes-Benz and Renault all had two models within the top 10.

The Range Rover Sport was the highest priced vehicle at an average of £64,015 in the top 10 selling within 49 days.

“No surprises the volume brands maintain a presence within the top 10 but the appearance of the Range Rover Sport is perhaps indicative of moving into the winter months combined with its strong following within the premium used SUV sector,” said Neil Gilligan, Indicata national business development manager.