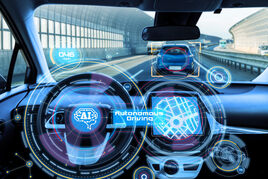 The Transport Committee at the European Parliament voted in support of a wide-ranging package of new vehicle safety measures.

The update to the EU’s General Safety Regulation for motor vehicles was proposed by the European Commission in May and includes a number of new mandatory technologies such as Autonomous Emergency Braking (AEB) and an overridable form of Intelligent Speed Assistance (ISA), to help drivers keep within the speed limit.

MEPs backed the proposals, though they requested an additional two years for Intelligent Speed Assistance systems to be made mandatory.

In a positive move, MEPs said that the new rules should be fast-tracked, with implementation to start two years after adoption of the rules, rather than the three years proposed by the European Commission.

In addition MEPs requested that eCall, an automated emergency calling system fitted to all new cars and vans in the EU, should also be fitted to lorries and buses in the future.

Because vehicle regulations are part of EU single market legislation – the Parliament’s Internal Market (IMCO) committee will take the lead role in defining the final vehicle safety rules – starting with a vote next month.

ETSC is urging the IMCO committee to back the original timeframe for the introduction of ISA technology, not least because the technology is already widely available.  For example, the new Ford Focus is fitted as standard with ISA, across all models in the range.

The European Transport Safety Council (ETSC) welcomed the progress and is calling for the EU to reach a final deal on both pieces of legislation as soon as possible.

The European Commission proposed an update in May that would extend the rules to all motorways, all primary roads and all non-urban roads that receive EU funding.

ETSC and other organisations have been calling for all main urban and rural roads to be covered, as many more people die in collisions on these types of roads than on motorways.

MEPs did not choose to extend the scope that far, but their backing of the Commission’s proposal to cover primary roads offers considerably higher potential safety benefits than that of the EU Member State transport ministers.

At a meeting in December, transport ministers said it should be up to Member States to decide which primary roads are covered.  ETSC fears that that would leave open the possibility that some countries would propose the bare minimum, or only roads that already meet high safety standards.

The European Commission also proposed in May that performance standards for road signs and road markings across Europe should be developed.

A high standard and consistency of road signs and road markings across Europe could be an important issue for higher levels of automation, when cars increasingly take away control from the driver under certain circumstances, says ETSC.

MEPs also want to see minimum road safety requirements for vulnerable road users such as pedestrians and cyclists.  The existing legislation, which mainly covers motorways, does not make special provision for these groups.

The final shape of the rules will only be decided following a vote by the full European Parliament and final negotiations with transport ministers.

“We hope the final package that ends up being agreed will make a significant contribution to reducing the 500 deaths on European roads each week, and that pressure to weaken the rules is strongly resisted during the upcoming negotiations.”

The European Transport Safety Council (ETSC) has announced the 2018 winners of the PRAISE awards, in recognition of outstanding efforts taken by companies to improve road safety at work.