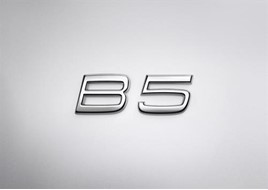 The company has upgraded its existing Twin Engine plug-in hybrid powertrain, while at the same time confirming that plug-in options will now be available on every model it produces.

In the coming months the company will offer a range of new mild hybrids, starting with diesel and petrol versions on the XC90 and XC60.

Using kinetic energy recovery, the new powertrains will provide up to 15% more efficiency.

A new brake-by-wire system interacts with the energy-recovery system and reduces fuel consumption and emissions by recovering kinetic energy under braking.

Volvo has upgraded its production capacity so that up to a quarter of total production can be Twin Engine plug-in hybrid cars. In addition, it expects its new ‘B’-badged powertrains to gradually become the best-selling models.

The XC90 will be available with a B5-badged mild-hybrid petrol or diesel variant, as well as a B6-badged petrol mild hybrid.

On the XC60, customers will be able to choose between a B5 mild-hybrid petrol or diesel variant, a B4 diesel mild hybrid as well as a B6 petrol mild hybrid. The B5 petrol will be available with front-wheel drive or all-wheel drive.

UK-market details and specifications are yet to be confirmed.