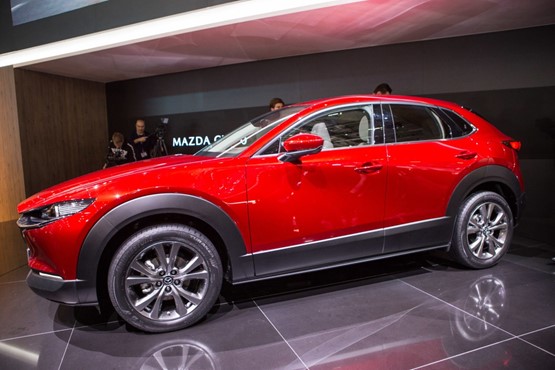 The CX-30 bridges the gap between the CX-3 and CX-5 for a mid-size SUV, giving Mazda a full line up for the first time.

In showrooms in late 2019/early 2020, it will be the second model to feature Mazda’s new Skyactiv-X petrol engine, following the platform-sharing Mazda 3 later this year.

“The Skyactiv-X will be a substantial opportunity in the fleet sector, offering greater power and efficiency and string residual values,” he said.

“With the step-change in interior quality, a substantially larger boot and high level of technology, we want to go in a premium direction with this car. I think it will be as transformative for the brand as the Mazda 6 was in 2002.”

While almost every manufacturer had new electric models on their stands at the Geneva motor show, Mazda stood out as one displaying internal combustion engines. However, that doesn’t mean it isn’t investing in alternative fuels, according to Thomson.

“We have an all-new small car battery electric vehicle that will be introduced with or without a rotary engine and then plug-in hybrids for large cars,” he said.

“That will be shown in mid to late 2020 and in the market in 2021, but it will still be a modest mix of our sales. It will future-proof us without distracting us from the ultra-efficient petrol cars. We think there is still a lot to do yet before electric.”

Thomson says Mazda has a similar view on autonomous technology. It has a place, but as “a co-pilot, not autopilot – it should support the driver not replace them”.

He added: “They shouldn’t take over unless absolutely necessary, so it’s not level four or five autonomy.”

He is similarly unconvinced by changes to ownership models, in particular peer-to-peer sharing where the car becomes a version of Airbnb.

“It will fit the world view for some, but I believe that people love their personal space in their own car and I don’t see that going away. We don’t want to be a commodity for a user-ship model – it’s hard to carve out an identity.”