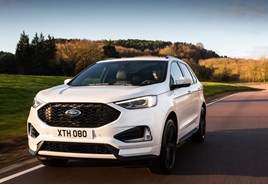 Ford has stopped taking orders for the Edge SUV after deciding to pull the model from its UK line-up.

A Ford spokesperson told Fleet News the Edge will continue to be sold in seven key European markets, with vehicle availability for customers in all other European markets as long as stocks last.

In a statement, the company said: “The decision to limit Edge availability to seven key markets is in line with our strategy aimed at strengthening the Ford brand and creating a sustainably profitable business in Europe, including by taking action to improve or exit less profitable vehicle lines.”

The announcement comes following Ford confirming it will cut around 7,000 jobs worldwide, including an unconfirmed number in the UK, as part of an organisational restructure that will prepare it for declining demand for cars and the shift to electric vehicles.

Ford plans to introduce a number of new vehicles by 2020, including a new compact SUV named Puma.

Edge availability will be limited only in Europe and will not impact any other region.

Ford’s new Kuga SUV will be available in mild, plug-in and hybrid variants when it arrives in December.

Ford has outlined an EV strategy that encompasses mild hybrid, self-charging hybrid, plug-in hybrid and battery electric solutions across its cars and vans.

Ford is to cut around 7,000 jobs worldwide, including an unconfirmed number in the UK, as part of an organisational restructure.