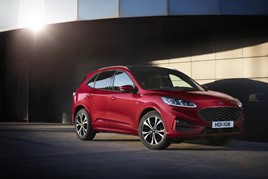 At a media event in Amsterdam, the company followed up previous announcements that every new vehicle launch would have an electrified option by revealing further details about the first models to include an alternative to petrol and diesel. Eight will be on UK roads by the end of the year.

According to Steven Armstrong, Ford of Europe chairman, the automotive industry is “facing change on an unprecedented scale”. He predicts that within 10 years, electrification will account for “more than half” of all Ford vehicle registrations, although details were sketchy about the mix between the different hybrid and full electric options.

The Ford strategy is centred on selecting the best current electrification solution for each type of vehicle, based on its most common usage.

For small cars, such as the Fiesta and Focus, this means a mild hybrid system called Ecoboost Hybrid which will support the 1.0-litre petrol engine to achieve CO2 emissions of 112g/km and fuel efficiency of 57.6mpg for the Fiesta and 106g/km, 60mpg for the Focus.

Neither figures are actually the most efficient in the range, but Ford claims the system also offers greater power for faster acceleration and sharper response, so improving the overall driving experience.

Ford is joining the growing throng of manufacturers to offer a full electric 3.5-tonne light commercial vehicle, although its BEV Transit will not be launched until 2021, more than a year after the Volkswagen Crafter and Mercedes-Benz Sprinter and two years after the Renault Master.

He described the electric Transit as a “fleet owner’s dream”, adding that it would be available in multiple body styles with no compromise on payload (one-tonne).

No details on range are available, although de Waard said: “We see this van as last mile for inner city use. Professional operators don’t want to pay for what they don’t use so we have to tailor the range – if they don’t need more than 80km, they won’t want to pay for 200km. You need a lot of batteries for long range and they are expensive.”

He also outlined details of a two-tonne Transit Custom mild hybrid, which will be launched later this year promising to improve urban fuel efficiency by up to 8%, and a one-tonne PHEV Custom mini-bus which will offer zero emission range of up to 30miles and total range of more than 300 miles.

The PHEV combines a 1.0-litre Ecoboost range extender with a 13.6kW battery to offer WLTP performance of 3.3l/100km and 75g/km.

Meanwhile, the first Ford to offer multiple electrification options will be the Kuga SUV. On sale later this year, it will be available with three choices: mild hybrid, self-charging hybrid and PHEV, the latter with more than 30 miles of electric-only range.

Ford also announced the Explorer, a new performance-focused seven-seat full electric SUV with 370-mile range, but said it is planned for left-hand drive markets only.

Ford’s new Kuga SUV will be available in mild, plug-in and hybrid variants when it arrives in December.

Ford has unveiled its Tourneo Custom Plug-in Hybrid people mover, which is able to travel 31 miles on electric power alone.