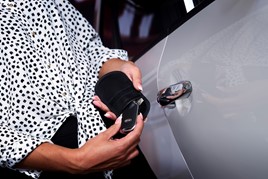 Kia has introduced a Faraday case for customers that purchase a new or used Kia model with a keyless entry system.

Called the KiaSafe case, it has been developed by the manufacturer to stop thieves using relay attack devices, where they obtain the frequency from the car key to enable them to access the vehicle.

The case acts in a similar way to a Faraday cage, eliminating this possibility with a layer of metal within that blocks the device that thieves use.

Kia says that its research and development engineers are also working to ensure that future keyless entry systems are rendered as close to impervious to attack as possible.

The KiaSafe case is available from participating dealers during the handover process and is also available to purchase from dealers for £9.99 for existing owners.

“We are as concerned about the hacking of keyless entry systems as customers, the police and the insurance industry,” he said.

“Whilst our current keyless entry systems do not have UWB or ‘sleep’ buttons our engineers are developing additional levels of protection for future vehicles and these will be applied as soon as is feasible given production schedules and new model introductions.”

Kia says drivers should adopt protection behaviours as advised by the police – such as not leaving keyless entry fobs in the front door lock of their home or close to windows – and to use the KiaSafe to ensure their key fobs are rendered safe from hacking.

Fleet News highlighted the new trend in vehicle theft termed ‘relay attack’ in 2017. It explained how a relay attack usually involves two criminals working together. One stands near the car being targeted and the other stands near the front door of the owner’s home to get in range of the key fob – often left on hallway tables or kitchen worktops. The device then picks up the key fob signal from inside the house and relays it to the car. Using this method, thieves are then able to drive away in a stolen vehicle in a matter of just a few seconds.

The keyless entry fobs now become disabled when not in use to prevent “relay attacks”, where thieves use a computer device to boost the signal from keys stored inside a property to steal a car.

Thieves could target 96% of motorists with relay attack

Ninety-six percent of motorists could be at risk of having their car stolen by criminals using a relay attack.

Ford has enhanced the keyless entry technology on new Fiesta and Focus models to make them harder to steal.